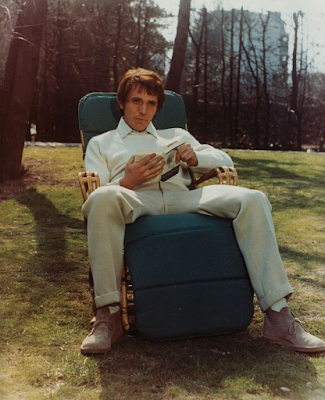 Oh me and oh my my my Criterion has announced their line-up of releases for the month of February and it's astonishment every which way one glances. Pier Paolo Pasolini's horned-up classic Teorema, which has a tight-trousered Terence Stamp romancing every member of a bougie family and driving them to madness? Yes please! Alfonso Cuarón's greatest-film-of-just-last-year Roma? Hells bells! The documentary to end all documentaries Paris is Burning? Best fuck believe it. You can see all of the new titles and their special features right here on their website. The one I'm most curious about though... 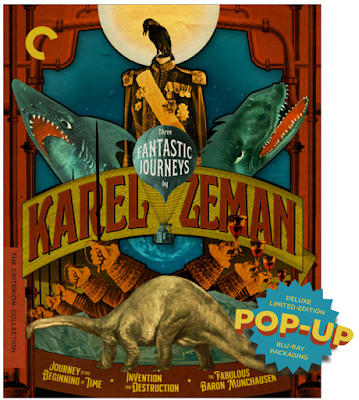 ... is the one I know the least about. A three-film boxed-set of fantastical fables from the Czech filmmaker Karel Zeman who's been compared to Georges Méliès and who's named as an inspiration to Jan Svankmajer and Terry Gilliam, Zeman apparently mixed live-action with animation in revolutionary ways to tell "boy's stories" of the fantastical including Jules Verne adaptations and similar tall tales. The three films includes are 1955's Journey to the Beginning of Time, 1958's Invention For Destruction, and 1962's The Fabulous Baron Munchausen (the latter making that Gilliam connection immediately clear). Anybody seen any of these? I want them all right now! Hit the jump for the list of special features from this set...

A one-of-a-kind silver-screen illusionist, Czechoslovak filmmaker Karel Zeman devoted his career to transporting viewers to realms beyond their wildest imagining. The deft, breathtaking combinations of live-action and animation techniques that he pioneered in the postwar years earned him comparisons to legends such as Georges Méliès, and an array of followers that includes Jan Svankmajer, Terry Gilliam, and Wes Anderson. Presented here are three of Zeman's most enchanting fantasies- a boys' adventure into the mists of prehistory, a Jules Verne-derived flight of fancy, and an exotic eighteenth-century tall tale- all of them treasure chests of wondrous sights, tactile textures, and headlong yarn-spinning that helped put Czechoslovak cinema on the international map.
SPECIAL EDITION FEATURES
* New 4K digital restorations of all three films, with uncompressed monaural soundtracks on the Blu-rays
* New programs with animation filmmaker John Stevenson and special-effects artists Phil Tippett and Jim Aupperle discussing director Karel Zeman and his complex visual trickery
* Four early short films by Zeman: A Christmas Dream (1946), A Horseshoe for Luck (1946), Inspiration (1949), and King Lavra (1950)
* Film Adventurer: Karel Zeman, a 2015 documentary about the director, featuring filmmakers Tim Burton and Terry Gilliam, illustrator Ludmila Zeman, and others
* Short documentaries by the Karel Zeman Museum profiling the director and detailing the production and effects of all three films
* U.S.-release version of Journey to the Beginning of Time from 1960
* Alternate English-dubbed soundtrack for Invention for Destruction, and the opening sequence of the 1961 U.S.-release version
* Restoration demonstrations and an interview with restoration supervisor James Mockoski
* Trailers
* New English subtitle translations
* PLUS: An essay by film critic Michael Atkinson, along with limited-edition deluxe Blu-ray packaging featuring pop-up art
JOURNEY TO THE BEGINNING OF TIME
A beguiling mix of natural history and science fiction, this early feature by Karel Zeman follows four schoolboys on an awe-inspiring expedition back through time, where they behold landscapes and creatures that have long since vanished from the earth. Hewing closely to the scientific knowledge of its era, Journey to the Beginning of Time brings its prehistoric beasts alive through a number of innovative techniques-including stop-motion, puppetry, and life-size models-creating an atmosphere of pure wonderment.
1955 * 84 minutes * Color * Monaural * In Czech with English subtitles * 1.37:1 aspect ratio
INVENTION FOR DESTRUCTION
This eye-popping escapade revolves around a scientist and his doomsday machine - and the pirates who will stop at nothing to gain possession of it. Freely adapting the fiction of Jules Verne, and inspired by Victorian line engravings, Karel Zeman surrounds his actors with animated scenery of breathtaking intricacy and complexity, constructing an impossibly vivid proto-steampunk world. Released abroad at the turn of the 1960s, Invention for Destruction went on to become one of the most internationally successful Czechoslovak films of all time.
1958 * 81 minutes * Black & White * Monaural * In Czech with English subtitles * 1.37:1 aspect ratio
THE FABULOUS BARON MUNCHAUSEN
In The Fabulous Baron Munchausen, Karel Zeman conjures the adventures of the legendary, boastful baron, whose whirlwind exploits take him from the moon to eighteenth-century Turkey to the belly of a whale and beyond. A kaleidoscopic marvel that blends live action with techniques including stop-motion, cutout collage, puppetry, painted backdrops, and antique tinting, Zeman's film is an exhilarating visual delight and a warmhearted whirl through a bygone age too entrancing to have existed.
1962 * 83 minutes * Color * Monaural * In Czech with English subtitles * 1.37:1 aspect ratio
Who? Jason Adams When? 3:09 PM

The trouble I have is that Criterion doesn't have English subtitles for English movies and some of their other film subtitles move by so fast it's impossible to read them. Pierre Le Fou is an example. I do have a lot of their releases, including a 2 disc set of Goddard's Breathless and Welles' Chimes at Midnight. AMC put out a few series of films with great special features and subtitles. I have a Marilyn Monroe collection and two 20th Century Fox collections that are quite good, too.

I've seen them, they're jaw-droppingly beautiful and the source of much "homage" (rip-off) by every visually quirky filmmaker since. One of the great and overlooked roots of modern cinema. When I get burnt out on effects blockbusters (which is most of the time) I dig them out. Pure lo-fi magic. I want this really badly.