Joe Manganiello Wants To Give Us the Fist 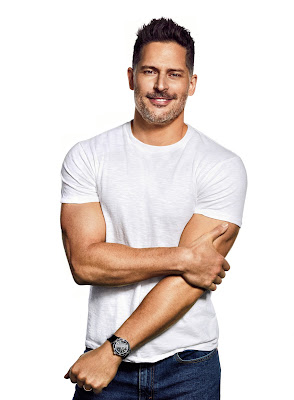 I find Joe Manganiello's post-True-Blood career, or lack thereof, slightly confounding. I know he was tied up with DC's super-mess for awhile -- he was meant to play the villain Deathstroke but Justice League turned into, well, Justice League, and all of that turned to ash in our mouths. But I feel like just relegating him to the love interest in a Pee-wee Herman movie (as awesome as all that was), a male stripper with like ten lines over the course of two films (as double awesome as all that was), and a baseball player in a movie nobody saw, well, is that all there is? He's not a terrible actor, he's charming and funny and he looks like Joe Manganiello... there should be more to speak of.

Well now there might be. There might be something very interesting. He's attached to a flick called Archenemy (thx Mac), which is about a "dubious superhero" called Max Fist (no I'm not making that up) -- dubious because he says he's from another dimension where he was a super-powered stud but here on Earth he has no superpowers... so he's just a big muscly dude that looks like Joe Manganiello saying crazy things. Honestly if a dude who looked like Joe told me was a superhero I'd believe him pretty easily, but in the world of this movie only one teenager, a kid named Hamster (no I'm not making that up), believes him. I guess that makes me a Hamster.

That all sounds goofy I admit, but the interesting thing is who's writing and directing this film -- his name is Adam Egypt Mortimer, and that's a name you should probably familiarize yourselves with. He has a horror flick called Daniel isn't Real that is out in some theaters on December 6th after playing several film fests including Fantasia (it's playing the Anomaly Film Fest in my hometown of Rochester NY tomorrow!) and DIR is a reeeeal interesting movie. I'll have more to say about it closer to its release date but it's one everybody should be paying attention to. Here's its trailer:
.


.
Anyway Mortimer is (rightfully) making a name for himself off that flick -- there have even been whispers that he might be the person hired to get the Nightmare on Elm Street franchise out of mothballs -- and so keeping our eyes on what's he's trying to get made is now a thing. The studio he's teamed up with is SpectreVision, aka Elijah Wood's company, and they've made a hell of a name for themselves with edgy material in the past several years -- they have given us A Girl Walks Home Alone At Night, Cooties, The Greasy Strangler, and Mandy, and they're behind that Nicholas Cage meets HP Lovecraft flick Color Out of Space coming out in January that sounds too goo to be true. (Nicholas Cage + Lovecraft = too good to be true.) And speaking of, that literally just got a trailer yesterday...
.
Who? Jason Adams When? 12:58 PM