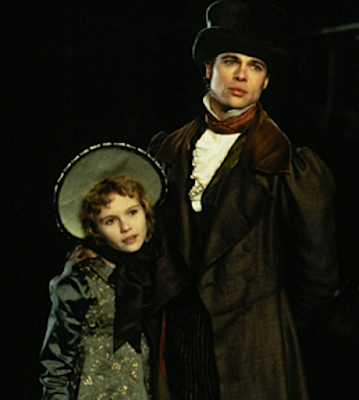 We're wishing Neil Jordan's Interview With the Vampire a happy 25 over at The Film Experience this afternoon with a little love letter to Kirsten Dunst's still funny and moving work in the film -- click on over here to read that, my bloodsucking fiends and friends. After re-watching it this weekend I realized that she's really about the only part of the film I still unabashedly love -- it hasn't aged well! Brad Pitt in particular should try to burn up all the copies of this film as he's embarrassingly bad in it, giving the juiciest of red meat to all the naysayers who call him just a pretty face.

I agree with you. I saw it a while ago and it just doesn't hold up.

I love that you mentioned the scene with the twins - an excellent moment, perfect for that character. I think Cruise is pretty great in Interview too (for the camp reason you mentioned) but yeah Dunst is special (as is often the case). To this day I'm still irked about the casting of Banderas. Armand being only a teenager (in the book) made the power dynamics of that subplot (the A plot in some of the other books) a lot more interesting.