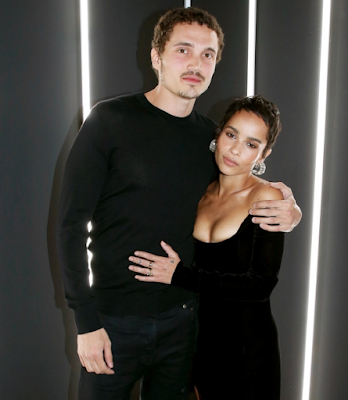 You've no doubt heard by now that Big Little Lies star Zoë Kravitz is going to play Catwoman opposite Robert Pattinson's Batman in the next Batman movie The Batman, from Cloverfield and Let Me In director Matt Reeves. I think she's good casting, I like Zoë a lot and she'll look killer in whatever costume they come up with, although she's always come off so reserved and "too cool" in everything I've seen her in before that I do have to wonder what her Catwoman will look like? Every Catwoman has been different through the years so she doesn't necessarily have to have Michelle Pfeiffer's manic frenzy in the role...

... although that was clearly the best take to date. Zoë was just so (pointedly, purposefully) somnambulistic in the last thing I saw her in (that'd be BLL season two) that seeing her go big, well, it's hard to picture at this juncture. But who knows what Reeves is going for tone-wise at this point. Not I. He's hiring terrific actors and that's half, hell that's three-quarters, of the battle. Now I just want him to cast Zoe's hot husband Karl Glusman as somebody too. Preferably somebody in really tight tights, given what we know about him thanks to that Gaspar Noé 3D porn movie he did. Riddle me that.
.
Who? Jason Adams When? 11:09 AM

I loved Michelle as Catwoman but it was incredibly campy and over the top. I also equally loved Anne Hathaway's take which was much more inline with Selina Kyle from the comic books

I love that you snuck in a Death Proof reference with that post title.