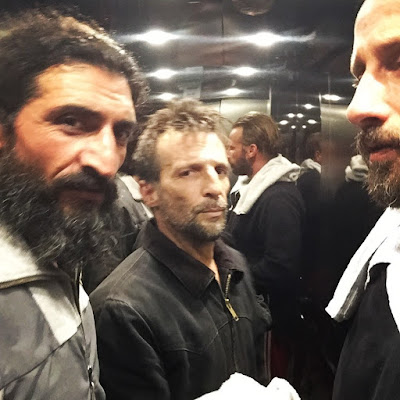 
Those "friends" just happen to be the very fine actors Numan Acar and Mathieu Kassovitz, so shame on me for not properly crediting them right off the bat -- these three beards have joined together for Terrence Malick's next flick The Last Planet, which I've told you about previously. Schoenaerts is playing Saint Peter in the flick, which is some sort of religious fable and which also stars Mark Rylance as Satan and the great Géza Röhrig as Mr. Christ (some call him by his first name).
.

I would topple entire governments for Matthias Schoenaerts' attention and approval pic.twitter.com/nT81olKicm
— His Name Was Jason Adams (@JAMNPP) September 28, 2019

.
Anyway Acar shared that top shot on his Instagram today -- he and Matthias have clearly hit it off since that picture immediately above on the left was also one he took -- giving me the first confirmation of some other actors cast in Malick's film besides the three we'd heard about; and now I check IMDb and there's actually a ton of actors listed...

... Aidan Turner is playing Saint Andrew! Uncle Benjen from Game of Thrones (aka Joseph Mawle) is playing Saul! Ben Kingsley and Joseph Fiennes and Douglas Booth are all playing... well, somebody, we don't know who yet! Oh, and... 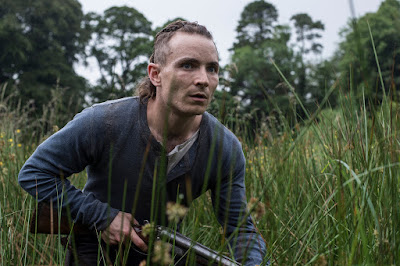 ... second most excitingly for me (after Matty obviously) is the word that Malick has hired Martin McCann for an unspecified role; if you don't know who McCann is he starred in a movie called The Survivalist in 2015 and gave one of my absolute favorite performances that year there -- he's worked steadily since then but not in anything big and not in anything I've seen and I keep checking on him, hoping he'll get a role worthy of his talent. There's no indication whether this will be that -- lord knows Malick loves to cast a billion people and then edit seventy percent of them out by the time the finished product rolls around -- but I can hope!
.
Who? Jason Adams When? 12:03 PM