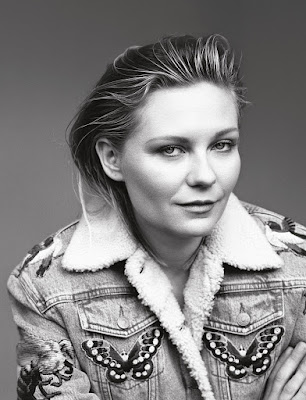 It is generally considered "a good thing" when you read an interview with somebody and it ends and you want more of the interview -- they did their job, they entertained you -- but I'm actually hella annoyed at this new interview with Kirsten Dunst at IndieWire for ending. It's not even especially short -- they cover several subjects from Lars von Trier's dumbness to her recent admission that she's tired of getting ignored come awards time -- but Dunst is, per usual, so delightful and smart and funny and did I say delightful, well, any short is too short. I could read interviews with her for days. Here's a choice bit about how she just replaced Elisabeth Moss on Jane Campion's next movie called Power of the Dog:

"“I feel for her,” Dunst said of Moss, who couldn’t go through with Power of the Dog due to a scheduling conflict. “It sucks, but it’s happened to me, too. But I’m also, like, ‘Great!'” She also teased, “Another piece of funny news is going to come out about this movie soon, but I can’t be the one to leak it.”"

LOL at "Great!" Anyway Power of the Dog so far co-stars Paul "The Riddler" Dano and Benedict Cumberbatch as brothers who're both ranchers in Montana in the 1920s, and who go to war when Dano's character marries Dunst's. It's based on a 1967 book by Thomas Savage -- anybody read it? It sounds like something I might want to read -- the latest edition has an afterword written by Annie Proulx and Amazon compares the book itself to Brokeback Mountain, in its "pitch-perfect evocation of time and place."

I wonder what Dunst's "funny news" about the project could be? Maybe her ex-bf (and the star of Dano's recent gem Wildlife) Jake Gyllenhaal will show up as some old-timey iteration of Jack Twist, making the Brokeback talk legits. One can dream. PS if anybody wants to go nuts with me about how wonderful On Becoming a God in Central Florida's first season was in the comments let's go at it.

Kirsten Dunst is the Great American Actress of our age pic.twitter.com/TL8JrmQuzU
— His Name Was Jason Adams (@JAMNPP) August 28, 2019

Oooh! Oooh! I grew up on a ranch in Montana! Now my interest is piqued. PIQUED!