Some video from the LITTLE WOMEN Q&A tonight!!! I’d known that Timmy was going to be in the room I would’ve sat much closer but they’d told us it was going to be all Skype! When he came out I peed my pants #littlewomen #timotheechalamet #saoirseronan #gretagerwig #florencepugh #elizascanlan #film #tracyletts
A post shared by Jason Adams (@jasonaadams) on Oct 29, 2019 at 8:10pm PDT

.
I've been having some issues with Blogger today so not all I'd hoped to plow through's getting plowed. But I'd be remiss at the least not sharing the photos and videos from the Little Women screening I attended last night, most probably! Looks like I won't have my review up today but I can do this much, I think. And yes in case you're wondering Timothée Chalamet was wearing plaid pants at the Q&A, clearly communicating directly to me his eternal devotion via pattern -- read ya loud and clear, love!
.

And I shouldn’t be surprised considering how she’s literally never been bad but Florence Pugh really is absolute magic as Amy, that horrible book burning brat — Florence makes you miss Amy when she’s not onscreen! What???
— His Name Was Jason Adams (@JAMNPP) October 30, 2019

.
Anyway more to come soon but the film's a total treat, and everybody talking on stage (including that insanely talented trio of blonde ladies beaming in via Skype) was so charming they singed my eyelashes off. I'm a little pissed I missed recording the Q&A's final moments where Greta & Saoirse & Florence began doing MIME, FOR THE LOVE OF GOD MIME in order to fill up the space of an awkward moment because I want nothing more than to turn it into a gif and watch it on a loop until I die. THEY DID MIME. 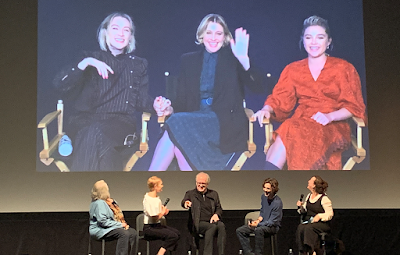 OT. Saw Corey Stoll in Macbeth at CSC last night and he he is terrific. And delicious. Try to go.