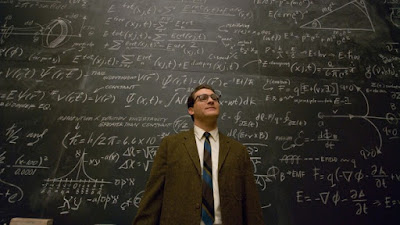 Larry Gopnik: The Uncertainty Principle. It proves we can't ever really know... what's going on. So it shouldn't bother you. Not being able to figure anything out. Although you will be responsible for this on the mid-term.

Today marks 10 years since A Serious Man came out and in those 10 years I have come to the conclusion that A Serious Man is the Coens' best film. I came to that realization sort of fast, actually -- I think within a year I had pretty much decided I felt that way, at least with some waffling regarding Fargo for awhile, but it was enough that I eventually came to regret where I'd placed ASM on 2009's Top Ten list, which was shamefully low. But now here 10 years on I am firm in this belief of mine. So a happy 10 to the Coens' best movie!
.
Who? Jason Adams When? 2:53 PM