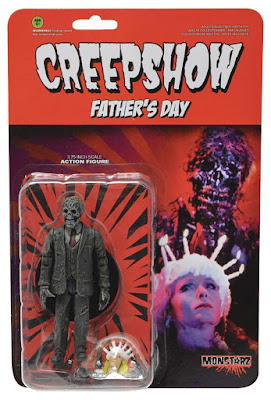 Correct me if I'm wrong but I do believe that the reanimated corpse of Nathan Grantham from the "Father's Day" section of the 1982 anthology horror film Creepshow might be the only action figure with a severed head cake as its sidekick? That's just an educated guess but if you want to show me some obscure Superman or G.I. Joe figure that's got one of those too feel free to do just that and I'll retract my assertion. Until then...

... we're gonna go with that being a yes. You can see a previous post on this section of Creepshow, which was written by Stephen King for the film, right here -- it's a classic! Creepshow I mean, not necessarily that post, although that post is fun enough. Also that post was written by me, not by Stephen King, which also might have been unclear? I don't know, I feel funny. Almost like somebody decapitated me and put my head on a platter and then frosted my head and stuck candles in that frosting and then lit those candles and then carried the whole business into the other room where my grubby relatives sat ready for the surprise of their lives. Funny.

Seriously I could just post Creepshow gifs all day though...

My god, I love this blog.

(Why don't I have that Nathan Grantham action figure in my life???)