When I started this series 13 days ago I mentioned that there was a specific film that inspired me to devote thirteen days worth of posts to a thing as ridiculous as Horror Cakes -- well here we are the final day and I can now reveal... nothing.

Okay not quite nothing -- I can tell you what movie it was. It was Bong Joon-ho's Parasite (reviewed here), which is out in movie theaters right now doing very very well for a foreign film in the United States. Which is a thing that translates to: not enough people have seen it yet for me to properly talk about this sequence, which involves a central mystery of the film and which, when unspooled at just past its midway point, drops about ten megatons of deep meaning onto the premises.

I also can't, much to my chagrin and consternation, gif the moment's pay-off, because it's a huge pay-off in the film and one of its most bedeviled and striking images, and I'd hate to ruin it for anybody. What I will say is that this movie, which isn't a Horror Film, has one of the decade's best Horror Images in it all the same.
.


.
It's somewhat reminiscent of the "God" conversation in Bergman's film Fanny & Alexander -- "Who's behind the door?" -- which I've noted before I find to be one of the scariest moments in any not-horror flick and so if I'm bringing this shit up know it's for good reason. Anyway let's just say that the rich family in Parasite has a son who has birthday and cake-adjacent trauma and by the end of the movie... that trauma will have been quadrupled.

"Let them eat cake" has never been as pointed. Anyway parallels between the rich family's kids and the poor family's kids in Parasite are themselves rich, and I think this also pays off when it comes to cake -- the gift that poor family's son is given, which has been heavily featured in the film's advertising (see this recent poster), is a scientific rock specimen which set upon a little base, and which... 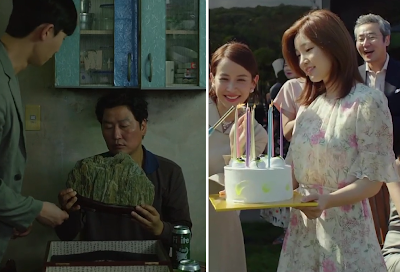 ... is often lugged around just like a cake.
That the rich family gets fluffy delicious cake while
the poor family gets a big cake-shaped rock, well...

... I don't think anybody's arguing that Parasite is subtle.
But effective. It's effective, and it's goddamned true.

That brings this year's Halloween celebration to a close! Click here to see all of the "13 Cakes of Halloween" and if you have any favorite cake scenes in horror movies I didn't talk about tell me about them in the comments. After all, we can be Cake Boys every day!
.
Who? Jason Adams When? 2:30 PM