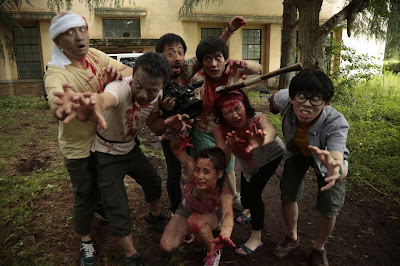 You shouldn't have to start off a gleefully positive review of one film by kicking three other (much worse) movies in the nards while you do it. But I've so profoundly suffered through several shitty horror films over the past few weeks -- why yes I am looking at you, It: Chapter Two and Starfish and Annabelle Comes Home -- that the pure spectacle of joy that radiates off of One Cut of the Dead really felt like something special. And so I do, I kick those bad three movies in the nards. Take a seat and learn something, bad movies -- this here is how you do it, with nothing but a dream and a hundred gallons of corn syrup on hand.

It doesn't start off that way. The first few minutes of One Cut of the Dead had me convinced I was watching a cheap dumb little thing -- not particularly offensive per se, but not the special event this Japanese Zombie Film had been heralded as as its made its way through every genre film festival known to man. But One Cut of the Dead has all sort of surprises in store for you, never ever being the box you're about to cram its sticky-handed corpse into -- it springs this way and that, a giddy treat.

That definitely turns One Cut of the Dead into a difficult film to write about, because you don't want to spoil all the beautiful gooey treats that it has in store. So let me just say I was most surprised by how big and bounteous its heart beats -- for an undead thing it sure lives mightily. Lustily. If you've ever labored on a crazy thing for the love of that crazy thing alone, and if you've ever found yourself in league with a bunch of similarly minded maniacs twisting up guts into ribbons and bows, One Cut of the Dead is the movie for all of us dreamers and schemers and screamers alike. Watch it two times! 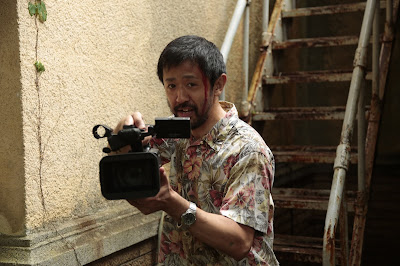 If you missed the trailer click here. One Cut of the Dead is out in NYC and LA on Friday, and is holding special screenings all over the country after that, click here for more info.
.
Who? Jason Adams When? 5:15 PM