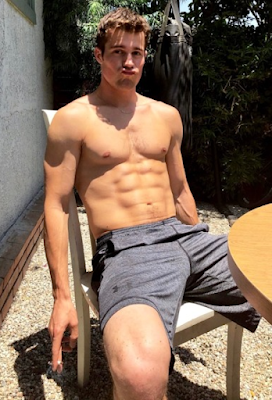 A couple of weeks ago I told you about Hollywood, Ryan Murphy's upcoming Netflix series that'll dive into the backstage lives of a bunch of folks in 1940s Tinseltown, including lots of real actual people up to and including the movie star and most famous closet case Rock Hudson. Well now we know who's playing Rock and it ain't the dude I guessed it to be -- it'll be the actor Jake Picking, seen above. Oh and below as well, cuz why the hell are we even here talking about this if not abs? 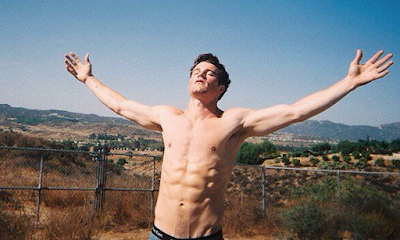 According to his IMDb page it looks like he's played several (presumably douchey) frat-bro types in his six-year career so far -- including a "Chad," a "Kyler," and three named "Sean" which for some reason I find hysterical -- in movies like Dirty Grandpa and Goat and Blockers and the forthcoming Top Gun sequel. Those all sound right.

Also added to the cast is Jim Parsons, who'll play Rock's infamous agent Henry Willson -- there's an awesomely sleazy book devoted to Willson called The Man Who Invented Rock Hudson that I very much recommend -- we don't know a ton about what Ryan Murphy's intentions are with Hollywood but if Henry Willson is a character I think we can start to hazard a guess where he's going. I've brought that book up a few times before -- how could I not, it's so in my wheel-house -- when discussing the rumors surrounding Rory Calhoun and Guy Madison... 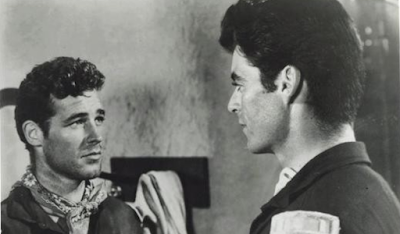 ... who were both "discoveries" of Willson's and long-rumored to be more than just pals. And now I really need this rumor to be brought to life via Netflix, please. Don't do us wrong, Ryan Murphy! Other "discoveries" of Willson's include Robert Wagner, Troy Donahue, Tab Hunter, John Derek... the list goes on and on. Willson is mentioned a bunch in Tab Hunter's book and I think he's in Scotty Bower's infamous memoir about his prostitution business at the time as well, although it's been awhile since I read that. 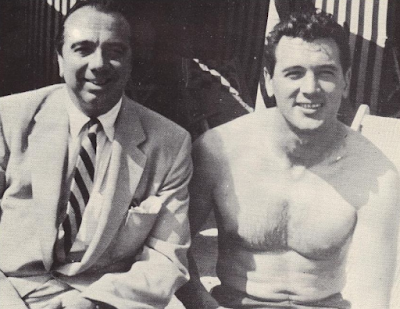 I've posted that shot of Willson smiling away with half-naked Rock before but one really must post it every time Willson comes up, for obvious reasons. Anyway I don't know if Jake Picking is a good pick(ing) (sorry) for Rock or not as he's never left any impression on me in the several things I've apparently seen him in before, and I'm not entirely convinced looks-wise -- I mean he is clearly attractive... 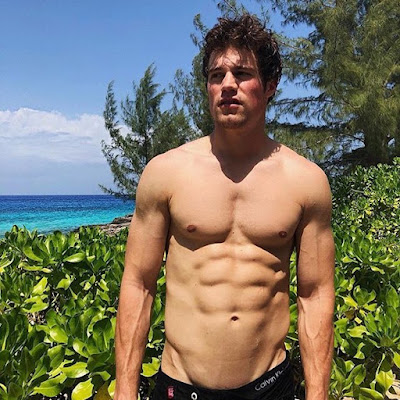 ... but is he Rock Hudson? We'll have to wait and see. Until then you can follow Mr. Picking on Instagram here if you so desire, and I assume you desire at this point. Bonus: he appears to be plenty good friends with Archie aka KJ Apa...

Rock Hudson and Henry Willson always makes me head back to re-read Anne Helen Petersen's "Scandals of Classic Hollywood" entry on Rock. That article also includes the tidbit that one of the names Willson gave to a star was "Dack Rambo" which is perfect.

good grief, how many abs does one person need?

The bottom picture with red hair he looks like KJ Apa.

The bottom pic is Apa. Including the tattoos. I don't really understand his instagram post using Apa's pic.