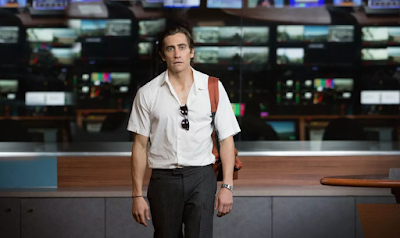 Lou Bloom: You see, Rick, they've done studies, and they found that in any system that relies on cooperation, from a school of fish or say even a professional hockey team for example, these experts have identified communication as the number one single key to success.

"They've done studies!!!" You know looking back at Nightcrawler here on the 5th anniversary of its release it's hard not to feel it might've been more prescient than it's heretofore been given credit for. The success story of an amoral sociopathic grifter through the manipulation of the television news is maybe something we have learned a little bit about in the past five years, no?

At the time I remember people saying that Nightcrawler felt weirdly dated -- that nobody watched the local news; that those Inside Edition types of shows were a thing of the past. And yet, and yet, this horror from their heyday called Donald Trump, the king of curdled champagne wishes and caviar nightmares, rose up and ate us like a fucking dinner mint just forty-eight months later.

So maybe what I'm saying is we should go back and watch Nightcrawler and give it its due, just maybe. Lou Bloom should one hundred percent be standing alongside Travis Bickle and Tyler Durden and Patrick Bateman as an iconic cautionary figure of toxic masculinity for our age, as terrifying and insidious as anything ever put on-screen. You can believe me. I've done studies.
.
Who? Jason Adams When? 10:52 AM

If not my favorite of that year - and it may be - it's at a minimum in the top 3 or so. And Jake should absolutely have been up for the Oscar that year, and maybe won (although I'd have been good with Keaton). While it has a look or style that relates to an older Los Angeles, the heart of it is as timely as can be, sadly.

A lot of movies are about obsolete things, but we see the people and processes they're caught up in.