There's No U in Antarctica 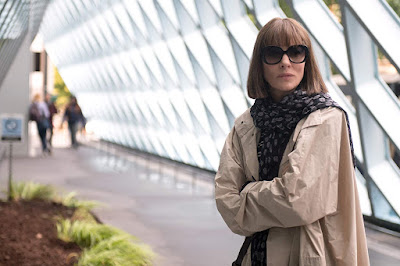 Sometimes the best times to contemplate our worst bits are when we're not planning on it. Sometimes the self-reflection sneaks in, unexpected like, a thief in the broad daylight, sniffing and snuffing and huffing about. Sometimes it's got a sharp bob hairdo and big black sunglasses and every mannerism and tic that Cate Blanchett can toss at it, and yet it cuts you to the quick.

So it went with Richard Linklater's new film Where'd You Go, Bernadette, a film I had absolutely zero intention of seeing -- not until it started getting baffled notices from critics, anyway. They reminded me of Bernie, Linklater's 2011 film with Jack Black and the only time I ever truly vibed on what Linklater was selling. I went in on a lark really -- I hadn't read the book; I hadn't even watched a trailer. It was a hot day and anything with Blanchett can't be that bad, right?

Bernadette is not that bad. It's not bad at all, actually. Yes it's broad and yes it's the tonal equivalent of gumbo -- a shock of stews steeped in each other, all piled high -- but sometimes you've gotta go broad to make your point, and Bernadette delivered more to me emotionally with its cartoonish flair than many a more Serious Movie movie that I've seen this year. 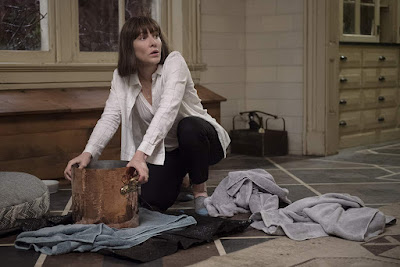 Blanchett plays Bernadette Fox, a woman who won a genius grant once and then kept disappearing. The movie meets her as a colorful mess of a Mom, holed up in a dripping house with a husband and kid who love her but don't seem to get her. Only as the rugs get pulled and the vines knotted underneath get their moments to shine do we see how self-inflicted Bernadette's wounds are, and how the movie is winding its weird-ass path just in order to whittle down and speak one on one with the closed-off weirdos inside all of us.

Where'd You Go Bernadette is big and bright and open about shutting down -- it's something like a comic kiddie movie about adult depression and self-sabotage. It zigs when anything else would be zagging, and in its strangeness found ways to shuffle around my own defenses -- I couldn't put up a fight with it, not when suddenly Kristen Wiig's rolling around on the pavement before I could argue. It didn't fight fair, and hugged me when I wanted to punch it. And I found myself, whaddya wonder, deeply moved.

I saw so much, too much, of myself in Blanchett's Bernadette, who'd rather run over a neighbor than have a common conversation -- who deeply loves the people she's let in, to a near smothering degree, but can't seem to carve space for much more. (This is a real Cancer's movie.) All of her energies are aimed in aimless directions -- she's got too much to give, so she's given up, paralyzed and poisoned by the insecurities she's let take hold.

Like I said, this is a lot for a movie with penguin jokes and pratfalls! But the penguin jokes are the cake they're hiding the pills in -- good cake, delicious cake, and I felt a little bit better after than before. A movie that can do that, well, eat it up. Pills and all.
.
Who? Jason Adams When? 2:15 PM

I'm glad you let us bully you into it. I also went in expecting to hate all but Cate, but I, too, was emotionally engaged and pondered it longer than most films I've seen this year.

I have to ask: what were your thoughts on the fanned open books tacked to the walls of the staircase?

I was horrified, but kept my composure ;)

I did spend a few minutes trying to figure out how the hell one would make that work, though -- how do you stiffen the book pages? I'm sure it's some monstrous real thing I don't want to know about! I would burn down somebody's home if they had those walls and never look back!


I saw so much, too much, of myself in Blanchett's Bernadette, who'd rather run over a neighbor than have a common conversation -- who deeply loves the people she's let in, to a near smothering degree, but can't seem to carve space for much more. (This is a real Cancer's movie.) All of her energies are aimed in aimless directions -- she's got too much to give, so she's given up, paralyzed and poisoned by the insecurities she's let take hold.

The film has not been released in the UK yet, but I wanted to say that as a fellow Cancerian this was quite confronting to read. I feel the same way! I look forward to seeing the film in the future.