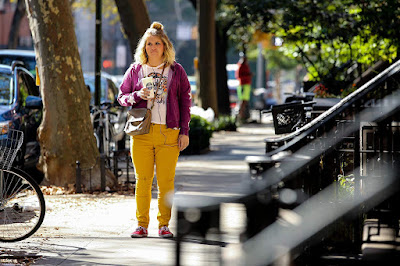 Top things tops let it be known that Jillian Bell absolutely kills it in the titular role of Brittany Runs a Marathon, the new body and mind positivity comedy about a gal who takes things into her own uhh feet not hands, that's out in theaters this weekend. Bell's already shown oodles of promise in smaller bits for several odd years now -- can I get a 22 Jump Street holla -- and she finally truly and totally shines given the leading lady treatment here. What works about this movie works mainly because of her and that shine.

I just wish a little more shined? That's not to say it's anywhere near a disaster for first-time director Paul Downs Colaizzo -- most importantly it's a comedy that's actually well-shot, something say Judd Apatow has never managed in his whole career. But it has that feel of first-timer about it, especially in how muddled to blunt its messaging swings -- I became somewhat convinced I was actually watching a Trojan Horse of an advertisement for the New York City Marathon in its last act, so sanded down did any edge it once had become. With the pounds went some of the personality.

But ultimately yes I laughed a whole heckuva lot, and oh alright fine I cried some too. The movie has a big heart -- not in a clinically obese way, just in a large and in charge way -- and its eyes are firmly planted in the right direction, with a reach wide enough for several characters and complications that you don't expect it to. It's the sort of movie I'll happily watch half of when I stumble upon it on cable some day down the line, a big bag of chips staining my depressed lap, and then go for a quick pointless but inspired run right after. Are those tears of laughter or drops of sweat, we may never know...
.
Who? Jason Adams When? 3:48 PM