Alexia: The problem is, he's got a girlfriend
he doesn't want to split up with.
Marie: Why are you so interested, then?
Alexia: Someone who's taken must be worth it.
I'm skeptical of single guys.

I never know whether I'm supposed to call this movie "Haute Tension" or "High Tension" -- like, does calling it by the former, the French title version, make me look like some asshole who misplaced his monocle? Whatever y'all know what movie I mean. It's director Alexandre Aja's 41st birthday today, also marking the first time I have realized that Alexandre Aja is younger than me. Bastard person with his accomplishments and shit. 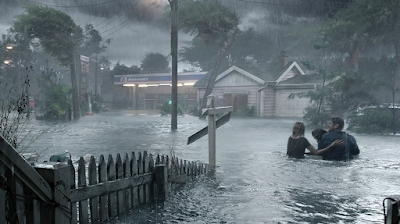 Anyway Aja's having a good year here in 2019 with his alligators attack flick Crawl getting good notices (here's my brief review) and decent box office -- it's kind of surprising it hasn't do better than the 37 million it's racked up so far but this is a movie that's not going anywhere; we'll be skipping past this sucker on cable for, uhh, as long as there's cable I guess. The world is changing so fast, says this old timer!

Decrepitude aside I have really been wanting to go back and revisit all the horror flicks of the Aughts that left a mark lately, most of which I haven't seen in a dozen years, High Slash Haute Tension included. Anybody revisited it lately? Even at the time it came out it was deemed problematic by some for its questionable gay content, but I've always had a soft headed spot for questionable gay content -- I've got an entire affectionate tag built around the subject! -- so that never bugged me too much. I just remember it living up to its title, whichever one. 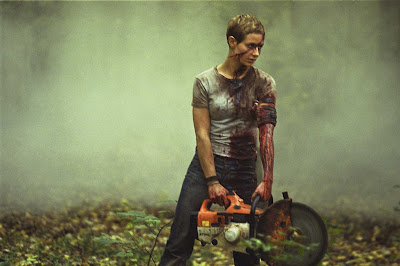 I remember LOVING High Tension for the first half. Seriously, the first 30 minutes had me white-knuckling the theater seat armrests. ... the big 'twist' at the end was so horribly bad (not to mention some scenes being logically impossible when you go back and re-watch it with the twist in mind) that it spoiled the film for me.