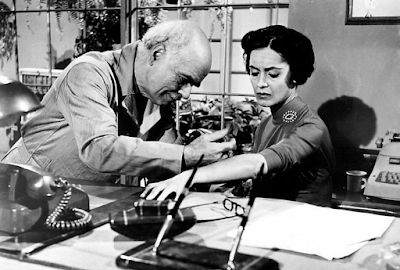 Arthur: I'd stay away from wasps if I were you, Mrs. Starlin. Socially the queen wasp is on the level with a Black Widow spider. They're both carnivorous, they paralyze their victims and then take their time devouring them alive. And they kill their mates in the same way, too. Strictly a one-sided romance.

I was just going to wish the Wasp Woman herself Susan Cabot a happy birthday -- she was born on this day in 1927 (no she is not still alive, I'm getting to that) -- with a good quote from the movie, but when I checked our archives to see if I'd used the above "good quote" before I instead stumbled upon a sad reminder that has made me sad! I was reminded that in 2007 we came real close to getting a movie called Black Oasis about Susan Cabot, starring Rose McGowan and Rodrigo Santoro and directed by Priscilla Queen of the Desert filmmaker Stephan Elliott. 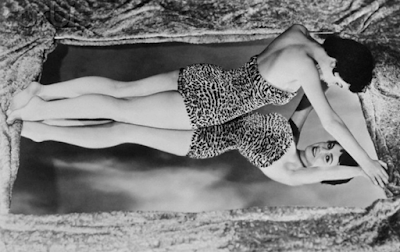 Why would anybody make a movie about the relatively unknown lead actress of a bunch of mostly bad B-movies, you ask? Well first off they didn't make the movie, so they wouldn't, clearly. But they might have made it because Cabot had one of those "only in Hollywood" tragic endings -- she was beaten to death with a barbell by her dwarf son, who blamed the murder on a ninja. Yes, really. They need to make this movie!
.
Who? Jason Adams When? 11:26 AM

I should certainly say so!