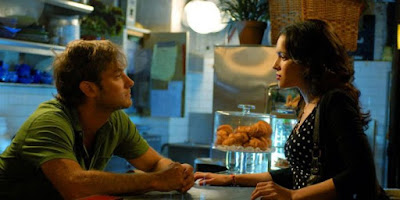 Has anybody watched this film lately? I only saw it the once when it came out but all of a sudden I want to watch it again, even though it left not much of an impression at the time. Perhaps it's a forgotten under-appreciated gem? I have the sense though that it was generally seen as a slight misstep from Wong Kar-wai (who's celebrating his 63rd birthday today, by the way) and that's why he hasn't make any more English language movies since (not to mention Norah Jones hasn't really tried acting again). Thoughts? In summation here are a couple of shots of Jude on set with WCW that I'd posted way back when during filming: 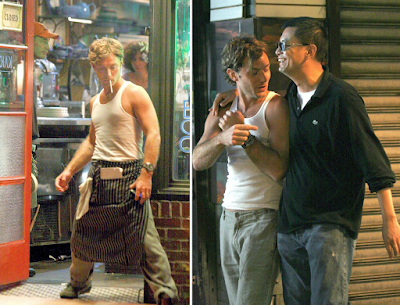 I saw it when it first came out and recently fast forwarded through parts of it again since it's on Amazon Prime. I want it to be better than it is. It's Wong Kar Wai, so it looks amazing, but as much as I like Norah Jones as a music artist, she has very little screen presence and since it's mostly her movie, nothing really lands. Rachel Weisz, however, is luminous, but that kind of goes without saying. If only she had been cast in the lead...

I remember liking it a lot at the time, it feeling original and soft spoken in tone and style; that being a rather fine balance well achieved in the film. And then since seeing it nothing about it regarding what it was about, why and how. So soft spoken is perhaps perfect but also not so memorable, so possibly just something to set it apart as a small statement of the question of poetic tiny gestures. Seeing you write about it now makes me wonder why small things that are not earth shakingly memorable oeuvre steps can't be just quite nice little side steps in that same oeuvre. That is how it felt back then when I saw it and that seems fine. Like a very fine, odd, pretty coloured, well behaved dip into some specific soft spot in the directors mind that is more melancholy indulgence than artistic bravoure. Not so bad for a small film. And I liked Norah Jones in it (that I remember). Forgot Jude Law was in it completely actually.