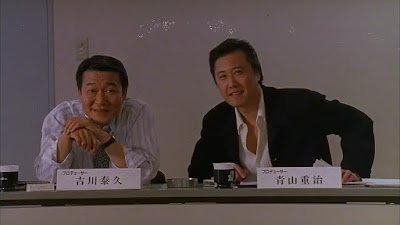 One of the many incredible movies celebrating its 20th anniversary this year is Takashi Miike's hella fucked up flick here, although what release date you choose to go by can shuffle that anniversary around as it had an extremely delayed release, playing festivals for a couple years before getting any proper US drop in 2001. Such things happen with movies this small and disturbing -- word's gotta snowball -- and Miike, who'd been working about a decade at that point, wasn't yet an international name. He sure was after, though. 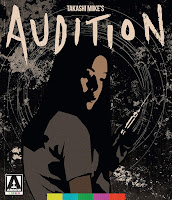 Anyway I somehow totally spaced on this in February but Arrow put out a special edition of this flick onto blu-ray then and it looks loaded with gore-some goodies, and even better the Metrograph movie house here in NYC is screening the 2K restoration of the film this week, all week, starting on Wednesday! I haven't actually sat down and watched this in maybe a decade so this will be a delicious holiday treat, escaping the sickening heat and humidity for a whole different kinda sick.
.
Who? Jason Adams When? 2:31 PM