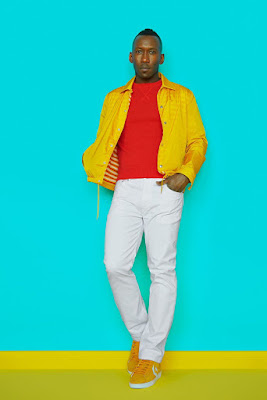 Mahershala Ali playing Blade is such No Shit Sherlock casting I can't believe I hadn't thought of it until Marvel announced it this weekend -- I suppose I hadn't spent a shit-ton of time considering who'd play Blade since Marvel kept insisting they had no plans to touch the comics any time soon and I couldn't see how a vampire fighter would figure into the all consuming MCU anyway, but then Mahershala came along, snapped up two Oscars, and everybody was like, "Ohh shit, right. Obviously." That said for all the cool individual bits of news that came out of Marvel's pop culture Comic-Con domination of the weekend's news cycle -- the new Doctor Strange will be a horror film! Tony fucking Leung is playing the Mandarin! Kumail's Biceps!
.

.
For all of that coolness I'm still feeling weary (and already tweeted such) about... well not really the films themselves, which are perfectly fine, enjoyable, disposable products. It's more the way we as a culture are reacting to them -- them, along with the gajillion dollars that the godawful looking Lion King made this weekend too. It's just the cult mentality that turns me off -- Marvel movies are fine, perfectly fine! Really! But the internet swooning like heaven itself has cum on their collective face from a television series' font choice just strikes me as a bit absurd, is all. Call me a nutter but I just want a little more from my money shots.
.
Who? Jason Adams When? 6:07 PM

Madden looks like he wouldn't mind a slice of Kumail.