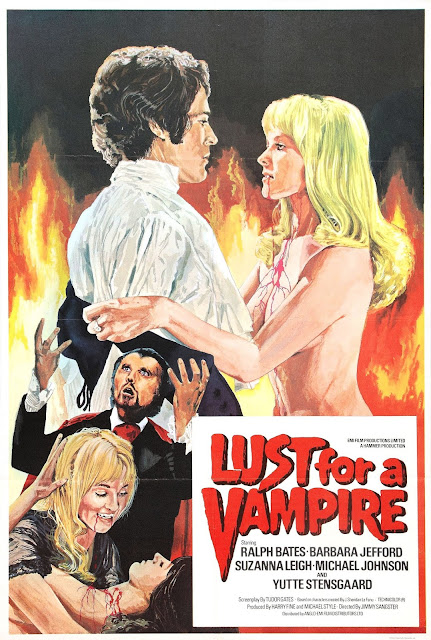 We hear a lot about physical media being killed off but man, we live in a Golden Age of shit getting the fancy blu-ray treatment all the same -- today it's one of Hammer's most entertainingly awful vampire flicks, Lust for a Vampire from 1971, that is getting the deluxe treatment and really, I recommend. I did a big post on one of the goofy death scenes from the movie a couple of years ago -- see that here -- it's terrible, a totally terrible movie, but knowing it's on blu-ray right now I can barely hold myself off from watching it again immediately. I mean it's still hammer, it's still got the costumes and the sets and that vibe we all love. Just... hammier. Way hammier.
.

Either I have gone cockeyed or every single actress
in LUST FOR A VAMPIRE is actually cockeyed pic.twitter.com/w9Hu50YLeU
— Jason Adams (@JAMNPP) July 6, 2017