Vacation, Meant To Be Spent Alone

Charles Manson is often credited with being the violent punctuation mark at the end of the hippie movement -- he revealed the sour intestinal underbelly of free love and poisoned the sippy cups that the Jonestown folks would drink from nine years later, with that near-decade in between being nothing but the death knells of idealism, one fly dropping after the next. The bright pop futurism of 60s design turned into matted rugs the color of snot, crocheted plant holders like clumps of rotted flesh dangling from the rafters, Cronenbergian slabs of pus-hued formica closing in on all sides.

Somewhere in the middle of that John Waters squeezed suburbia like a fetid zit, happily popping hot goo in our faces, and Alejandro Jodorowsky blew up elaborately outfitted lizards lining religious shrines of his own making -- walls so candy-colored and tall they seemed without end or sanity or reason. You could feel the hallucinogens pulsing through your veins just by looking directly at it -- you were damp with sweat and viscous, seeing gods tumbling out of every crumbling orifice.

Every age has its own sways, its own ups and downs, and the art that comes to represent each new temporal form of madness, but I know I'm not the only one feeling a mid-70s vibe these days -- just turn on the news and hold your breath until you hear the name Richard Nixon, I promise you won't have to pass out for it. Manson's getting his own explicit revision soon from Quentin Tarantino, but Ari Aster's horrific day dream of Midsommar out this week is for my buck the blast of Jodorowskian psychosis this moment in present tense truly calls for. We're all mad these times, and here's just the movie for us. 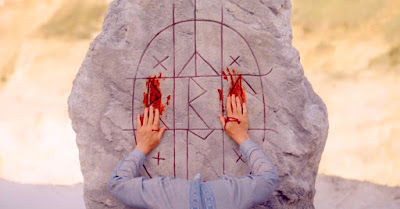 Last year Aster staked his claim as the high priest of grief with Hereditary, tossing Toni Collette into the pits of hell and poking her with a stick for good measure -- this time around it's Florence Pugh, her bright round pink face beatific from her own bed of flames and flowers. When we first meet Dani (Pugh) she's in a panic that Things Aren't Right, a feeling I think we're all familiar with upon waking every day -- sure enough they ain't, and once again Aster knows well enough that leaning into our horrible suspicions about everything, absolutely everything, is the stuff of horror movie magic. Now I look upon the sun and the sun itself is corrupted.

There's been an earthy folksiness to a lot of pop culture for some time now -- childish drawings dot our advertisements and movie titles, ukulele Zooeys grin their sly grins in sitcom embellishment, hand-stitched dresses and Warby Parker onesies. The Brooklyn ethos of White People Shit, tied in pink ribbons and seriously overpriced. Midsommar is Ari Aster gutting Etsy like a fish, its cutesy cotton innards splatting on the sage dusted floor. Curlicued doodles of creatures and their lopsided genitals engulfed, undone; the obscenity of A-frames.

Midsommar feels like what would happen if you or I -- you know, relatively normal people, all things considered -- suddenly and accidentally by no fault of our own wandered into a Jodorowsky picture at its drug-bent nastiest. Dani finds herself on a bad trip, a bad trip indeed, as she heads off to the middle of nowhere, specifically Somewhere Scandinavia, with her asshole boyfriend Christian (Jack Reynor) and his asshole friends in tow to where the sun never sets and the plant-life pulses, inhales, wheezes, coughs up a lung or two. And there in the center of this anti-Eden stands one of those A-frames, its unholy black heart, yellow as a Caution Sign, a school-bus skidding right off a cliff.

Hereditary was rich with this form too -- Aster loves an attic, a spiked trinity shape of symbolic strength and fortitude, closed to outsiders and self-fulfilling, self-sustaining, feeding itself forever; a three-tiered commune without start or finish. The word "family" written in severed fingers pointing in every direction. That film ends with one defiled attic space, clotted with flies and naked sagging flesh, replaced by another -- the outside playhouse where little Charlie took refuge from the world; a peak-roofed miniature poised upon stilts. A ghost face hovering over the lack of a house. It was nothing but attic, the heat-blackened brain of a home, severed and floating just underneath the blank blot of outer space -- the middle-placed absence, thick with fate, where we all end up.

With Midsommar Aster again drags us kicking and screaming towards that everything and nothing of intrepid triangular architecture -- human beings perverting the lines of the divine, father and son and the pretend holy spirit, in wood mud and always bone, singed and soft singing turned to sacrificial screams. The bright sun, our best reminder of utter godlessness and contempt, sits at its upper most point, never blinking, burning down our eyeballs to ashen pits of their own. Wailing I woke up with a fright the morning after seeing this movie, and might well greet each day after with a knowing smile of reinvigorated madness -- freshly pleased with my punch-drunkenness, perchance to dream again of an insane Ever After tucked softly, warmly, away from it all. 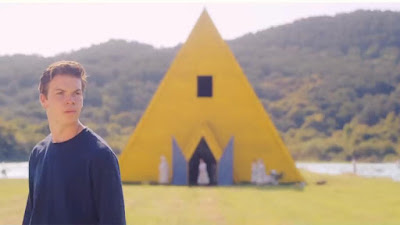 ok.......really your writing is as always vivid, and interesting, and there is certainly some importance in knowing how the movie affected you although it does get a bit purple and seemingly self congratulatory about the prose you've selected to describe the film's impact. But, really would it hurt to tell us a little bit of what the movie is about. For example, the film in it's trailers resembles both versions of the classic Wicker Man as you've pointed about before. I'd like to know before I pay a lot of money for a movie these days, if it is in fact a kind of arty rehash of Wicker Man. I truly love the kind of movies you are interested in which is why I follow your blog, but your reviews are sometimes so cloaked in their personal impact, how they relate to your childhood, or some similar trauma in your life, that they miss what I think is a reviewers obligation. At least tell us enough about the film in a basic level to let us know if we want to part with our hard earned money to see it.

I get what you're saying, Anon, it's an aspect of reviewing that I've always struggled with -- the plot junk -- but I've been writing long enough and feel solid enough in my writer's voice at this point, that this is how I write about movies, how I want to write about movies, now.

I went to school and double-majored in Film Studies and in Poetry, and all I've wanted to do is find some way to smash these interests of mine together. It's often an awkward fit and I have no pretensions about how successful I might be, but it's what I'm interested in exploring when I write reviews.

I don't have much of any interest in plot. Regurgitating "what happens" makes me want to kill myself I'm so bored by it. I'm interested in how a movie makes me feel, the tangents that it sends my brain off on, and I feel like if I can capture that essence, that experience, even if just in fits, then I'm accomplishing what I am interested in accomplishing.

It was your review of Hereditary that got me into the theater. It was the best movie I saw last year and my friends got bored of me constantly wanting to talk about Ari's great great film. I'm so happy to read that his follow up had such an impact. Can't wait to see it. (Now... can Robert Eggers PLEASE get to work on that Nosferatu remake????)

I don't know, anon. For reviews concerning plot you have literally everywhere else to look for. What Jason is doing here, in my opinion, is reminding us that films have a human, emotional component and they can affect us in different ways. He's letting us know how they impact him in particular, which is a tougher and more interesting approach than describing the qualities of a movie. That act of self reflection is an important aspect of art appreciation, and it's lacking in most reviews floating around the internet nowadays.

Jack Reynor talked about how important his full frontal nudity is to his character’ arc.
Is this another quick peek ala Chris Pine or does it really make a statement? A description would obviously be appreciated too 😏

"Somewhere in the middle of that John Waters squeezed suburbia like a fetid zit, happily popping hot goo in our faces, and Alejandro Jodorowsky blew up elaborately outfitted lizards lining religious shrines of his own making -- walls so candy-colored and tall they seemed without end or sanity or reason. You could feel the hallucinogens pulsing through your veins just by looking at directly at it -- you were damp with sweat and viscous, seeing gods tumbling out of every crumbling orifice."

Ugh. I agree with a previous commenter here that you have a gift for vivid prose. That can be a mixed blessing: you write sensuously about the sexy and erotic, touchingly about the dramatic or romantic, and wittily about the comic and ironic. If your intention in this case was to evoke the rot behind the candy colored psychedelic facade of the sixties, the disenchantment of the seventies, you succeeded! Though my own recollection of that period is softened by the fact that it coincided with my adolescence, I'll concede the effectiveness of your description as my interest has been piqued. I'll go see Midsommar to satisfy my curiousity. If it's as good as Hereditary, it will have been worth it.

This is beautifully written. Now that I know your two majors, this makes perfect sense. You really never settle for the easiest, laziest word if there's a better choice somewhere out there.

I liked this film a lot. The actors, the setting, the cinematography, the score, the way it played with the experience of doing drugs, etc.

But, I will say, I didn't totally buy the protagonist's final choice. Yes, the bf was a dick (except for that random moment when he was a total sweetheart when she didn't want to do drugs yet) and yes infidelity sucks, but I just couldn't get there with her. And sure, almost anything these characters did could be blamed on the drugs but that feels like lazy writing. I needed a few more breadcrumbs, just one or two more moments, where I saw her journey get her to that decision.