I'm Gonna Get An Abortion & I Can't Wait! 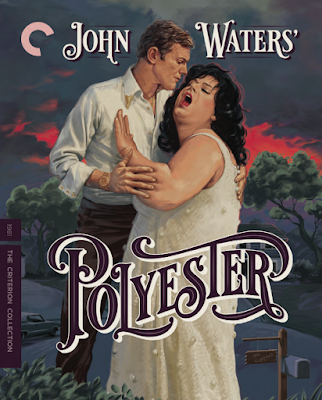 Have I mentioned to y'all that a single day hasn't passed since I met John Waters last month that I haven't thought about the fact that I met John Waters? I mean it doesn't take a lot of effort on my part since I'm still in the process of reading his new book (I'm taking it extra slow, to savor the sticky filth of it) and since my room is covered in newly autographed John Waters memorabilia, but it's still been pretty thick, this particular period. So consider today's official news of Criterion releasing his film Polyester on blu-ray come September 17th an extension of my magnificent obsession, I suppose -- and look at that cover! What glorious artwork. You might even call it... divine? (Groan, I know, I know.)

Anyway when I talked to John the other week I had him sign my old Odorama scratch-and-sniff card for Polyester and he mentioned that Criterion was working on making new cards for the new edition so I knew this was all in the works but it's lovely to have a countdown clock now, not to mention word on all the other per usual jaw-dropping special features that Criterion's including with the disc. Hit the jump for the full list...

I gay gasped so loudly and so largely when I saw that cover that two coworkers fell over from lack of oxygen.

i just want to say how much i love your writing and this post seems as appropriate as any. i’ve read you for years, it seems, and always appreciated the news, the views and the pics. but something went airborne in the most wonderful way a year or so ago and you just seemed freed up in a way every writer dreams to be. so kudos and thanks from a fan in boston.

Oh wow Ed, what a lovely thing to say - thank you so much for that. That's the sort of thing that keeps somebody going. Thank you.