If you're an older woman, older women are always having a moment -- it's not a moment, it's reality. But Pop Culture usually doesn't have eyes for those moments, and so it's in terms of Pop Culture that I speak when I say here and now that Older Woman seem to be having A Moment. Ma might not have been the number one movie of the weekend but dollar for dollar it's probably the most successful, tripling its teensy tiny budget, and so it must be said -- step aside Mothra, Octavia Spencer is the queen of the weekend box office.

But what is this moment? Before Ma I saw the trailer for the new Terminator film, and the return of kick-ass Linda Hamilton drew applause; funnily enough I just happened to be watching Ma in the exact same theater where I saw the latest Halloween film last fall, which brought original "Laurie Strode" Jamie Lee Curtis back to kick some of her own ass -- active living post-Activia.

Those two are tied to nostalgia obviously, but beyond that their return at this period in time feels notable, feels of This Moment of which I speak. And Ma, in the way of all base-minded mainstream horror films, the ones that whether they know they're doing it or not feed on our broadest cultural anxieties, feels like a bit of a definitive wrestle with our moment's preeminent themes. 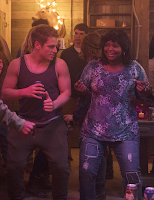 What if I told you I was making a movie about a woman who was constantly rejected for not being cool enough -- for being a square who always seems as if she's faking it. She's not genuine. She's not, dare I say, authentic. She has moments where she comes across as, I don't know, what the word, shrill perhaps? If she tries to look pretty she's ridiculed. She's nasty. A try-hard. Robotic. Cold. Crazy. She laughs too loud. What is she wearing? Why am I even being forced to look at this old broad anyway? I just want to kiss my hot sexy young girlfriend and chug beers with all of Kavanaugh's friends, goddamn.

The most tense moment watching Ma for me was the moment when Octavia Spencer sits down at a mirror and starts applying make-up. These are always the moments in these films where the movie laughs right in the faces of these women for trying -- where they become Baby Jane grotesqueries, smacking their dry lips together in a haunted pantomime of femininity turned to dust and decay. Who could love a thing like that, they seem to say? Old Women are terrifying and gross, yuck! Kill it with fire!

Ma isn't a revolution and it kinda remains one of those movies at heart, but Octavia Spencer and director Tate Taylor do yank at those threads and undo them a little. Spencer is too good an actress not to give Sue Ann -- "Ma" is only a nickname, and the script's own waffling in what it calls the character represents, I think, a purposeful confusion of who gets to shape whose story -- boundless humanity in those great big eyes of her, and so when Sue Ann sits down in the mirror and puts on some lipstick the movie doesn't laugh at her. She looks lovely. She's Carrie White all grown up -- nowadays it seems Carrie White finally gets to grow up! -- and so when the nasty characters on screen do end up laughing at her, well, we wince. Respect her or suffer fools, gladly.

Ma is superficially ninety minutes of ridiculousness and fun, a goof where Missi Pyle gets plowed over for a lark and Luke Evans' peekaboo cock is put to excellent prop use; where a lewdly photographed teenage boy does a gratuitous striptease and Allison Janney gets put in a dog cage. And yet I bet that in the long run it ends up saying more about us at this moment in time than a dozen more "important" stories that speak of Serious Things will; I'd take Octavia Spencer in a prom dress yanking dog collared brats over last year's Oscar Winner any day forever, anyway. 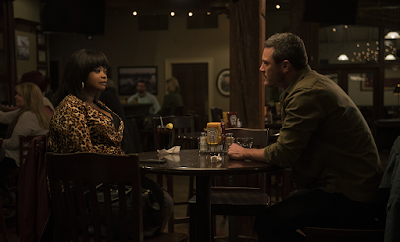 This is a really lovely review.

Terrific review. Going to see it tomorrow afternoon with my sister and my niece!

"And yet I bet that in the long run it ends up saying more about us at this moment in time than a dozen more "important" stories that speak of Serious Things will; I'd take Octavia Spencer in a prom dress yanking dog collared brats over last year's Oscar Winner any day forever, anyway."

THIS is why I love this blog. Jason, you're amazing.

Such fun, better than it has to be and just about the right level of fun trash. And hello peekaboo! (Surely prosthetic, right? What with the grabbing and all?)

Well, I already wanted to see it but after reading this I REALLY want to see it, and not just because of that line about Luke Evans (although that's a big part of it, pun...intended?).