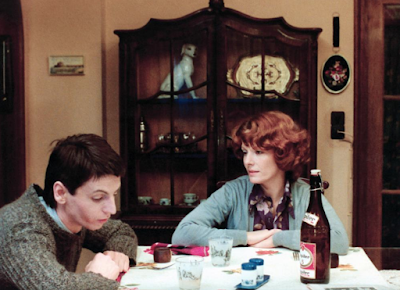 Sylvain: [Referring to his friend Yan] He bought a book that explains lots of things about climaxes and orgasms. He says we should be interested in women at our age, but he doesn't want some young girl. He says a man's penis is like a sword. The deeper you thrust it in, the better. But I thought, "A sword hurts." He said, "True, but it's like fire." But then where's the pleasure?
Jeanne: There's no point talking about these things.
Sylvain: He's the one who told me everything when I was 10. I said, "What? Dad does that to Mom?" I hated Dad for months after that, and I wanted to die. When he died, I thought it was punishment from God. Now I don't even believe in God anymore. Yan also said it wasn't just to make babies. So I started having nightmares so you'd stay with me at night and Dad wouldn't have a chance to thrust inside you.
Jeanne: You shouldn't have worried. It's late. I'm turning out he light.

The great director Chantal Akerman was born on this day in the year 1950. I finally got to see this movie in the theater last year -- I had been waiting to see it until I could see it on a big screen, given the fact that it's mostly a three and a half hour film about a woman folding napkins -- and it is indeed a revelation; its languid still rhythms, the accretion of minutiae until it becomes unbearable. If you can turn off the world and watch the film, really pay attention to it, do it right this second.
.
Who? Jason Adams When? 11:55 AM