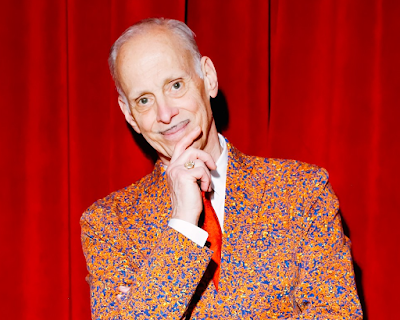 Begin, middle, end, I am riding so high on meeting John Waters last night that I'll just post about him all day -- why not? He's our everything! Call it John Waters Day. John Waters Week even, what with the new book out now and all the interviews he's giving. There's another new one over at W Magazine this afternoon worth your eyeballs effort -- I mentioned him talking about his noted absence at the Camp-themed Met Gala in my post this morning but W got him on the record about it, and also asked him what he thought of everybody's stabs at dressing "camp," here's what he had to say:

"I think that everybody really tried, and everybody got into the spirit of it. True camp was so bad it was good and they didn’t know it. But nobody goes to the Met Ball and doesn’t know what they’re doing—there's no innocence about it. And no one says the word "camp" anymore. Even 90-year-old queens don’t say that. Even if we’re sitting under a Tiffany lampshade. Maybe even at the last meeting of the Rita Hayworth fan club. People don’t know what it is. To me, camp was a secret word that gay people used and Susan Sontag exposed it in a great, great way. But then it was done. Once the secret was out, it was over. I mean, what is camp today? Is there a movie out now that’s so bad it’s great? Maybe not, because everybody is in on it. It’s not accidental... Maybe when they had Baltimore Fashion Week, which was pitiful. All the models smiled and waved—the two things you’re never allowed to do, and they were waving at their parents. [Laughs.] That was camp."

He also had a lot to say on his love for Justin Bieber, and he mentions that he loved Gregg Araki's Now Apocalypse, so check it all out at the link. On that note and speaking of camp I'm off for the long holiday weekend now -- I've got a screening of Rocketman tonight that I've got to run to! See you next Tuesday...

"Is there a movie out now that’s so bad it’s great?" Of course there is. It's called Showgirls.

How many pictures of Taron slumped in chair are there?

@Jack can you believe Showgirls was 24 years ago?? And while I suspect both our ages are such that that feels just like a couple of years back, it's a whole millenial's age ago. To Waters' point, that's not out "now" and I'm hard pressed to think of something that was camp without being intentionally campy, and therefore too aware to actually be camp.