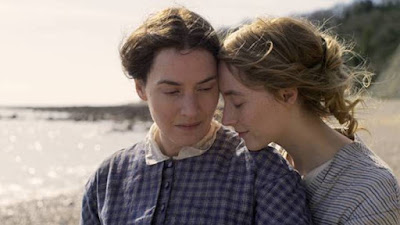 One of the films we're most excited about down the line (not sure when it's out) is the new one from God's Own Country director Francis Lee called Ammonite -- I mean, it's an 18th century lesbian romance starring Kate Winslet and Saoirse Ronan, so duh. We've been yammering about it since day one -- see our original post here. Anyway now we have a photo seen above, and a plot synopsis to boot, all via Empire.

"In 1800s England, acclaimed but unrecognised fossil hunter Mary Anning (Kate Winslet) works alone on the rugged Southern coastline. With the days of her famed discoveries behind her, she now searches for common fossils to sell to tourists to support herself and her ailing mother. When a wealthy visitor entrusts Mary with the care of his wife Charlotte (Saoirse Ronan), she cannot afford to turn his offer down. Proud and relentlessly passionate about her work, Mary initially clashes with her unwelcome guest, but despite the distance between their social class and personalities, an intense bond begins to develop, compelling the two women to determine the true nature of their relationship."


They add a few more members of the cast and if we weren't already wetting our pants with excitement -- and we were -- we'd really be wetting them now -- we are -- because those names include the great Fiona Shaw and James McArdle (who's made a career out of making out with dudes we want to make out with) and Gemma Jones and Alec Secareanu. Those last two are of course both from God's Own Country, having played Josh O'Connor's grandmother and sweater-wearing mud-schtupping Romanian fuck-bud, respectively. Happy to see them back in the fold!