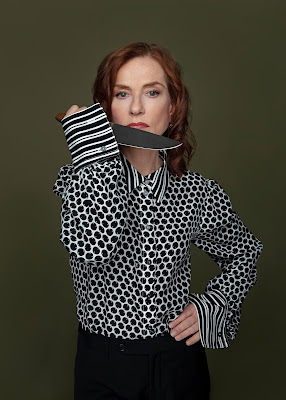 Unless I'm struck by a sudden fit of inspiration (and given the way my brain's been behaving this week that seems unlikely) what will remain my final review from 2019's Tribeca Film Festival has just gone live at The Film Experience this afternoon -- click on over to read my thoughts on the French fairy tale riff White as Snow with Isabelle Huppert playing the evil stepmother to Lou de Laage. The above photo isn't actually from the film but hey if you've got a great big picture of Isabelle Huppert holding a knife you post the great big picture of Isabelle Huppert holding a knife. Anyway spoiler alert the film is just okay -- by far the best thing about watching it for me was this thing I tweeted right after:

Just realized it was ANGELA FUCKING BASSETT sitting next to me watching an Isabelle Huppert movie
— Jason Adams (@JAMNPP) April 25, 2019

OMG.. What did Angela smell like? Sass and money?