Jake and the Giant Killer 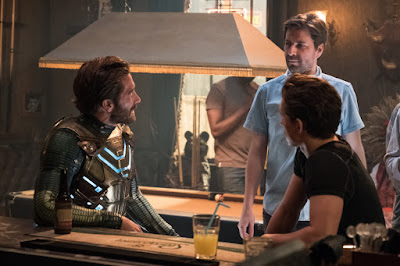 That there's a brand new to my eyeballs snap of Jake Gyllenhaal and Tom Holland chillaxing between takes with their Spider-Man: Far From Home director Jon Watts on the set (via) -- I literally had no idea until right this second that the director of the short film (and its feature length remake) Clown, about a possessed clown costume, was the director of this movie. How the fuck did that happen? Here's my review of Clown by the way -- I actually thought the short worked somewhat better than the full-length version. Watts also directed Cop Car, the movie about some kids finding an abandoned cop car, which was pretty good from what I remember, but which I never reviewed so I can't refresh my memory. But this is an odd choice for a mega-blockbuster, isn't it? I guess Marvel officially just wants team players, not visionaries, now. No offense to Watts intended -- I hope the movie's good. This just feels like another "hire the cheap white dude" affair. 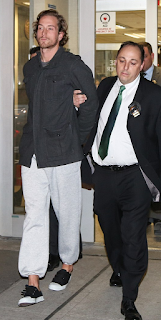 But I'm not here for that! I'm here posting this post to share new Jake news. Today it's been announced that Jake is producing a movie called Gilded Rage from The One I Love director Charlie McDowell (speaking of indie white dudes, but hey I did like that movie) -- Gilded Rage will tell the true-crime story of the wealthy investment banker Thomas Gilbert Sr. who was allegedly murdered by his son in 2015. The film will be based on some Vanity Fair articles, which makes sense -- this is a very Vanity Fair story. DH says that Jake doesn't intend to star in the film, which is good, because I don't think he really know if he could pull off the son's whole Scandinavian Giant vibe, seen to the right there. That's a Chris Hemsworth character if ever there was.
.
Who? Jason Adams When? 12:09 PM

It's a little strange that you weren't aware since this is his second Spidey outing - he also directed Homecoming!

God grief my eyeballs must have blurred right out as I stared at his IMDb page? Weird.