"I always worry about being crushed underneath all of these."

"They don't seem stable, do they?"

"Imagine. Like the witch. In The Wizard of Oz."

Who else is over the moon that we're getting lots more of Fiona Shaw on the second season of Killing Eve? More of Fiona Shaw is oxygen, sustenance, sexual gratification. On that last note... 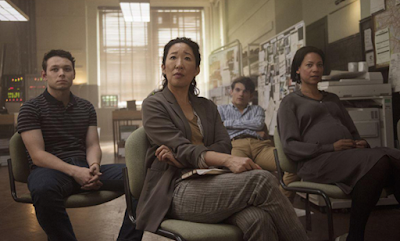 ... don't think I don't see you back there doing your typical un-shy crotch forward pose, Edward Bluemel. (See our big post on him here.) When are they gonna hook him and Sean Delaney up? Or would that be too much white-bread Brit-twink at one time? The Oxford Edition of crossing the streams?

Edward is probably more experienced. But there's something about Sean that makes you just want to muss him up in EVERY POSSIBLE WAY.

Love Hugo's slouch and hair and bone structure and how he wears his clothes. But Kenny is my big tv crush these days.