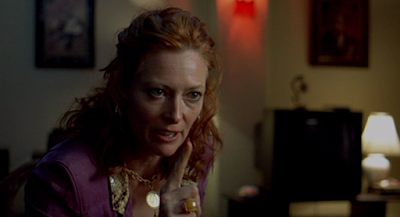 Julia: I wouldn't wipe my face with your ass.
Santos: They'll be a day you regret saying that.

Ten years on to the day -- Erick Zonca's film is technically 2008 but after floating around for a bit it finally hit the US on this day in 2009 -- and Julia remains my favorite performance of Tilda Swinton's, which as you know is saying a HELL of a lot, given all Tilda has given to us. Before then, after then -- things as big as The Ancient One in Doctor Strange or as broad as Mason in Snowpiercer or as quiet as the voice-less rock-star Marianne in A Bigger Splash, and yet it's this wily woman I always come back to. (Here's my very brief review from the time.) 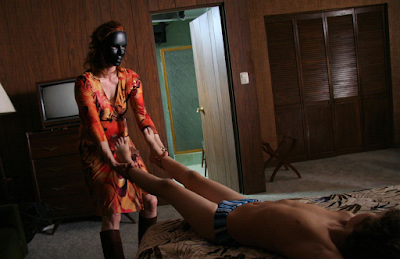 The way we watch Julia (the woman) set her sights on one bad decision after another with the firmest of convictions, sweating her way from catastrophe to catastrophe, slithering her way long-sided up the Sword of Damocles... it's something. If you've never seen it I recommend you do. If nothing else, at least watch her blast through the film's amazing opening credits...

... you'll be hooked after that, I promise. The film's free on Tubi, or a couple of bucks to rent on Amazon. Erick Zonca's last film, the French noir Black Tide with oft-naked Vincent Cassel and Romain Duris (reviewed here) is not quite up to Julia standards but it's worth checking out too. Zonca does morally compromised real well.