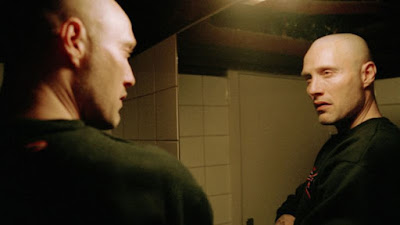 I totally should have mentioned this in my post earlier today on Rainer Werner Fassbinder's BRD Trilogy since those three movies are included in this series, but hell this is worth its own post I think -- Film Forum here in New York is doing a screening series starting this Friday and running through May 16th called "Trilogies" that is, you guessed it, showing a truly mammoth collection of tri-connected films. Including those just mentioned Fassbinder films, and including the Godfather trilogy, including Nicolas Winding Refn's Pusher trilogy (starring Mads Mikkelsen above) which I somehow still have yet to see (I keep waiting to see it on a big screen so now's my chance!), including, well, who doesn't the series include is a better question. There are films by Pasolini and Satyajit Ray and John Ford and Sergio Leone and Hou Hsiao-Hsien and Aki Kaurismäki and Rossellini and Cocteau and Bergman and Wadja and on and on and literally onnnn. Check out the entire line-up right here. It's truly astonishing stuff -- the reason I live in this city.

Yes Leone thanks for catching that!