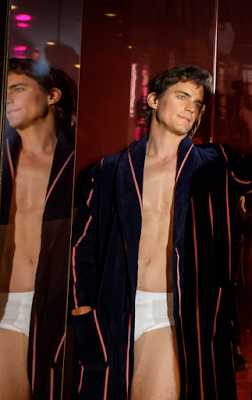 Ryan Murphy just announced on his Instagram that the stage show of Boys in the Band that he produced for Broadway last year is going to be turned into a new film for Netflix -- everybody is reprising their roles including yes, most importantly says me, Matt Bomer. Missing the above moment on stage was my biggest disappointment about missing the show and, you know, living in general. The film will be directed by the stage show's director Joe Mantello, and co-star Jim Parsons, Zachary Quinto, Andrew Rannells, Charlie Carver, Robin de Jesus, Tuc Watkins, Michael Benjamin Washington and Brian Hutchison, and it's set to hit Netflix some time next year. Did any of you get to see it on stage?
.
Who? Jason Adams When? 2:13 PM

Joe Mantello better find a reason to get Tuc out of his clothes. I've been obsessed with him since the 90s and he's not lost an ounce of beauty.

Yup saw it on stage, beautiful show, and Matt Bomer definitely showed what was under that underwear. ;)

Loved it. Definitely didn't complain about Bomer bum in person.

Ugh. Maybe I'll watch it on mute so I won't have to listen to the dated homophobic portrait of self hating queers whining and blaming their mothers for their problems.

Seriously, you are that down on Bohemian Rhapsody, but you embrace this piece of homophobic trash?

Boys in the Band is an important portrait of Gay History. I am able to view it as History. It is a view of Gay Life 50 years ago. Bohemian Rhapsody was made like 12 months ago -- it doesn't get that leeway.

Ok, so if Denzel Washington announced his next project would be to remake Stepin Fetchit movies, African Americans should flock to see them because he's hot and it's history?

I sure can't speak for AAs but yes, I think the idea stands. The idea being that as long as the material is shaped through the time period through which the material is revisited, as long as the material is revived in order to comment upon it through What We Know Now, then yes, I would see either of those things. I didn't see BitB on Bway so I don't know if they succeeded in doing that but I think revisiting these of-their-time pieces has tons of possibility to see where we came from and who we are now in relation to that. We should not forget the past.