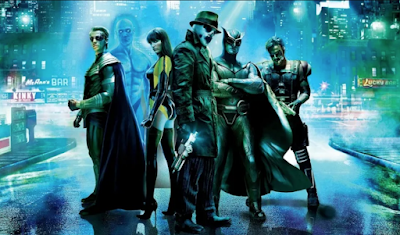 Today is the 10th anniversary of Zack Snyder's Watchmen, a film I tend to like more than most but which I concede has its issues. (Here's my original review, which is sort of painfully rambling to read now to be honest but I'll share all the same.) It's become especially difficult in the wake of everything that Snyder has made since Watchmen to attribute as much irony to the film as I had been when I first saw it -- when I saw the film in 2009 I thought the soundtrack being excruciatingly on-the-nose was the point, that it was some meta-Verhoeven shit turning superhero propaganda in on itself. Now here ten years and one Justice League later I'm more inclined to think along the lines of my pal Chris's piece over at The Film Experience today -- that Snyder's not really in on the joke. All that said I haven't sat down and re-watched the Watchmen in awhile, so I'll shut up and just point you towards some celebratory butts. 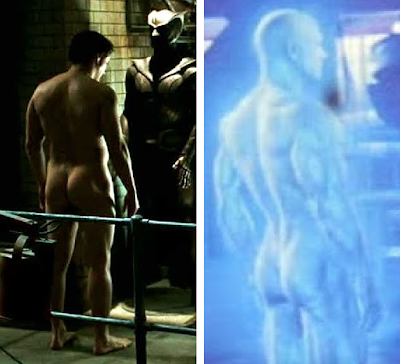 Hard To Really chose what Buttocks is best Since I Like them Both (Very Attractive Looking) since both have Hot And Sexy Chests and ("Nipples") worth Ogling at however Mr Patrick Wilson is the Vote I had to give.

It's weird complaining about such a visual pleasure but Patrick Wilson's body is emblematic of everything that's wrong with this film. Snyder clearly read Watchmen obsessively but didn't get that these characters aren't supposed to be cool or sexy. His version of Nite Owl having gone badly to seed is that Patrick Wilson's abs are only toned instead of carved like granite.

Yet still, I want that ass, in every sense.