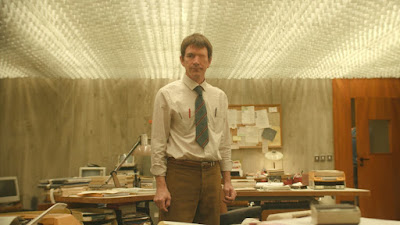 Like a crossover episode between Barney Miller and The Twilight Zone translated into French and back by somebody who doesn't speak French, Quentin Dupieux's Keep an Eye Out! (aka Au Poste!) never takes itself seriously, and neither should we. No matter since it's a gorgeous little goof -- or rather, one big goof built of many smaller goofs -- that takes up just over an hour of your life that you won't want back, I think. I cherished its slap-happy slice of impeccably manicured time, anyway.

Two fellows sit across from each other at a desk and have it out -- think My Dinner With Andre only with more rubbery eyeballs flying around the set. One's a cop (Benoît Poelvoorde from Man Bites Dog) and one's a murder suspect (Grégoire Ludig), but from the word go the mustaches are all wrong -- doesn't Dupieux know the cop always has the stache, man? Already the absurdity abounds and it only grows, stache hair by stache hair, from there.

Before you know it chests are smoking and eyeballs are flying and a whole new use for a steam iron's been found, and it all happens inside of an amber-dipped retro-world of typing machines and polyester collars, curved cement hall walls under excessively low ceilings, that I couldn't get enough of. The production design on this sucker makes the whole slight affair feel ten times as spectacular -- I longed to run my fingers along its every smoke-stained office-movie surface. It's really beautiful, is my point, and as lovingly insincere and coal-hearted as a box full of banana peels dumped out across a nursing home rec-room -- it's just my kind of kaleidoscopic nonsense.

Keep an Eye Out! is screening as part of the "Rendez-vous with French Cinema" series at FSLC -- check out the schedule here.)
.
Who? Jason Adams When? 2:06 PM