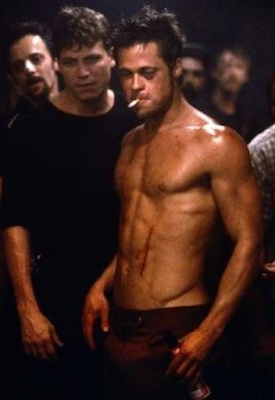 We just mentioned how The Matrix is turning 20 this weekend, which got us to look on back -- what I believe to be the very first big project that MNPP ever tackled, way back in 2006, was a look back at seven years previous: an appreciation of the films of 1999. Now I link to that but I warn you it's pretty basic -- I was just getting my footing with this whole blogging thing then. Still I'd say that was some special foresight on my part, given how we're all going nuts here in 2019 wishing the astonishing run of films from 1999...

... a happy 20th anniversary week after week. Fight Club! Go! Election! Magnolia! The Blair Witch Project! Being John Malkovich! The Sixth Sense! It's endless and astonishing stuff. We were really afraid Y2K was gonna be it -- we were getting out all the good stuff while we could!

So anyway back in 2006 I polled y'all to choose your favorite film of the year (from nine choices I designated) and y'all picked Spike Jonze's film Being John Malkovich as your fave with a hefty 22% of the vote. And hey, that was a good pick! It still looks good here in 2019. I have always had smart readers, awwww. But let's see if we feel differently in 2019. Here's the same nine films -- now vote!
.
web survey

Somewhat surprisingly I haven't had to personally re-pick my favorite films of 1999 yet for our "Siri Says" series, and my favorites now would look somewhat different than it did in 2006, but we'll save that for when Siri tells me to do that. (I live to serve.) But y'all please take to the comments and tell me which 1999 films I'm a fool for forgetting for now!

Voted for Ripley, the best of this selection got me. Still think American Beauty is the best of 1999, despite what we know now - I revisited it recently and every aspect of it remains thrilling.

Voted for Ripley, but The Sixth Sense is my real vote, with Ripley and Election tied for a close second.

I was going to vote for Ripley too, but I´m going to throw a vote to Run Lola Run to spread the wealth :)

I think 1999 might be the best year for movies in my lifetime. "Boys Don't Cry"! The Alessandro Nivola-Jonny Lee Miller "Mansfield Park"! "Dogma"! (mostly kidding about Dogma but not entirely)

I don't know if I'd say "Go" was the best film of the year, but it's the one I've watched a million times.

Honestly, my fave of 1999 was...
...the remake of 'The Thomas Crown Affair'. Flashy, stylish, romantic, and a fearless and sexy performance by Rene Russo. Rarely do you see a mature actress empowered and powerful and naked and owning it.

Election. Tracy Flick is a great villain because she doesn't think of herself as a villain; she's just getting what she wants in life (and if other people get crushed in the process, too bad for them).

All about my mother is the best movie of 1999

I like a lot of these, but I voted for Lola, because I really like it. It's probably the closest thing I've ever seen to a video game in cinematic form and Franka Potente is iconic.

Of general '99 movies, I also have a soft spot for Jawbreaker. I was shocked to find it was such a failure in its initial release, because I always liked it and I know a number of people who are fans too.

All About My Mother!

So many of the films listed here are amazing but no one mentioned House of Mirth with Gillian Anderson, which was devastating to me.

Alias74 makes an excellent point. Russo's performance was so vital and fun to watch that I still think of that movie -- her in particular -- on a regular basis. That's pretty good for a movie I watched maybe twice years ago!

Wow looking back on it 1999 had a lot of great movies. I voted for Fight Club but my honorable mention awards would go to Being John Malkovich, which was just SO off the wall, and Run Lola Run was exciting and I liked the time replay element. Talented Mr. Ridley was great and faithful to the book but I still prefer Purple Noon with the incomparable Alain Delon. Maybe 1999 will go down in history as a historic year for movies, like 1939? I hope we don’t have to wait another 60 years for such a great batch of movies!