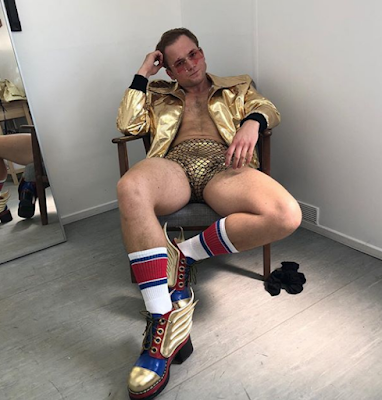 First off props to Taron Egerton for wishing Elton John a happy birthday today by sharing that photo on his Instagram -- I think I can speak for Elton, and for nearly every gay man alive, when I saw we appreciate that. A lot. Okay now on to the subject at hand -- last week I said I wasn't going to post about Rocketman anymore if the studio was going to cut out the forty second scene of butt-out intimacy between Taron and Richard Madden in order to make the movie PG-13 a la that crap-fest Bohemian Rhapsody. And yet here I am posting? It's not just because Taron posted that picture, I promise. I am not that easily suckered into breaking my word. (Close, but not quite.) The film's director Dexter Fletcher (who, we should probably remind you at this point, was also the director brought on board after Bryan Singer left BR) actually took to his Twitter to address the controversy:
.

Seeing much speculation about ROCKETMAN!! That’s good! It’s still unfinished so it’s nothing but rumors. It has and always will be the no holds barred, musical fantasy that Paramount and producers passionately support and believe in. See for yourself May 24. Dx x
— Dexter Fletcher (@Dexfletch) March 22, 2019

.
Does that mean the scene will remain? I have no idea. After Bohemian Rhapsody gay-bashed me in the face I don't feel particularly generous towards Fletcher and whatever his usage of "no holds barred" means, although we have no idea how much of that movie ended up actually being his in the end. It's a question mark. We'll have to wait and hear from people who see the movie, I guess.
.
Who? Jason Adams When? 11:45 AM

I remember reading, back when it was announced, that there was only like, two weeks left to shoot on BR when Fletcher was hired. So I'd assume than most of the movie is Bryan Singer.

Anyway Fletcher also did Eddie the Eagle, which was perfectly fine if not spectacular, so I'm looking forward to Rocketman to be at the very least also an enjoyable movie.

This is quite a nice surprise