The first "teaser" for Quentin Tarantino's Once Upon a Time in Hollywood has arrived -- I am never going to understand what designates this as a "teaser" when it seems like a full-ass trailer to my eyes -- and you've probably watched it by now; hell you've probably watched it a couple of times by now. It is a "teaser" after all, I guess! I feel teased! It mainly highlights Leonardo Dicaprio and Brad Pitt's characters, who play an actor and his stuntman respectively, as well as Margot Robbie getting out of a pool naturally. But there is a lot of stuntman-slash-actor Mike Moh (who's playing Bruce Lee) featured too, and I am fine...
.

... with that! In that gif at the start of this post that's Moh duking it out with Emile Hirsch playing Jay Sebring, who was Sharon Tate's ex-boyfriend slash hairdresser slash close friend -- he was one of the people who got murdered by the Manson Family that fateful night. 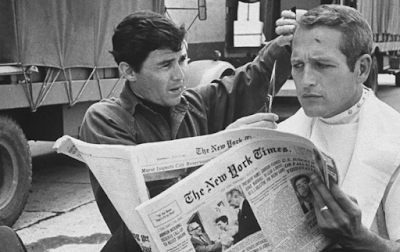 Sharon definitely had a type, didn't she? Anyway the trailer is a heckuva lotta fun if you ask me, and reminds me, after some reticence with regards to this specific subject, why a Tarantino Film is a goddamned event. Perhaps I'm swayed by the fact that the whole Manson thing isn't mentioned once in this teaser? I doubt we'll be so lucky when the "full trailer" comes along so let's enjoy the madcap while we can.
.

i was a fan of emile hirsch because i had a crush and he seemed like a respite to the general machismo of actors at that time. Now I just dont think a guy who went to court for literally strangling a woman is the best casting choice for a film about Sharon Tate.