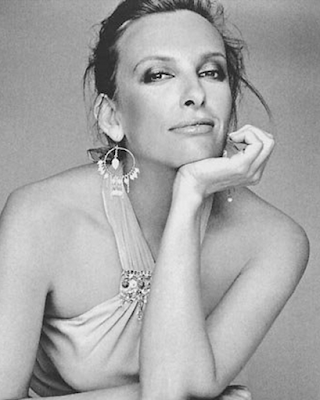 Y'all know that Synecdoche New York, the best film of the 21st century, is on Netflix now right? Here is my original review of that film, but if you scan through the site I've written a lot on the film over the past eleven years. Charlie Kaufman has only made one movie in the interim -- the stop-motion animated Anomolisa (reviewed here) -- but he's ginning up a cast for his next one, which is for Netflix (which makes the sudden appearance of Synecdoche on their platform make some sense) and which is called I'm Thinking of Ending Things, based on a book by Iain Reed.

We already told you all of this when Jesse Plemons got cast in the lead! (And yes, yes, Jesse Plemons is so the lead of a Charlie Kaufman movie.) But now, as you've probably guessed off the picture up top or read elsewhere since I am always behind with this shit, Kaufman's added some more cast, and one of the "more cast" is my favorite actress Toni Collette. Cue this reaction last night:
.

I read that Toni Collette / Charlie Kaufman news as my subway train pulled into some random station, not my stop, and I literally had to hold myself back from jumping out the doors and doing a fucking dance on the platform pic.twitter.com/MAFxIfXYmT
— Jason Adams (@JAMNPP) March 27, 2019

.
This is a thrill, y'all! And to whoever it is at Netflix that's as big a Toni Collette fan as I am -- she's got her series Wanderlust there and she was in Velvet Buzzsaw as well -- I owe you a great big bouquet of crisp hundred dollar bills, and pansies. And hamburgers! A bouquet of hamburgers, my treat.
.
Who? Jason Adams When? 12:00 PM