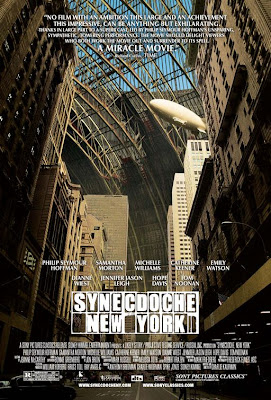 I went and saw Charlie Kaufman's Synecdoche, New York for a second time last night, and I think I'm finally beginning to get a handle on it. It's a film I envision myself watching many many times in the future, and judging by this second viewing it's one I think will only reward such due diligence.
In the hierarchy of Kaufman films I'm not near ready to displace Eternal Sunshine from the tippy top, and probably never will be so very very deeply does my affection for that picture run, but Synecdoche is in my opinion a wondrously rewarding and challenging film...

Which I feel compelled to chastise for a certain sloppiness while at the same time wondering when sloppiness and personality and idiosyncracy became a defect. Just because Kaufman's obsessions are meta-narratives un-threading themselves in front of the viewer in place of say Pedro Almodovar's obsessions with feisty mother-daughter relationships, does that make them less palatable? Does their insistence on eluding anything resembling straight-forward story-telling leave no room for sloppiness, is what I mean? When one makes a picture that's so labyrinthine and puzzle-like, it can be frustrating that every bit doesn't seem to make sense. But isn't that what seems to make the film so deeply personal at the same time? I cannot in the end become Charlie Kaufman, there is no little door in an office that will plop me down in his head so I can see everything through his eyes and understand it all. But while I might not be able to fit all the pieces together on a logical level, it all makes sense on an emotional level, or it did to me.

Still, here's my attempt to make sense of some of the things that I can. Big spoilers ahead, so beware if you haven't seen the film yet.

There's a very important moment towards the end of the film where Sammy, Caden's double, tells Caden that Caden's never really seen anyone other than himself, and I think there lay one of the keys to understanding the film. It's like that last bonkers act of Adaptation writ large - meta is all. Everything we're seeing from the first frame is being filtered to us the viewer through the lens of Caden's mind. His neuroses, his tics, it's all warping the story as we're viewing it.

An example: Because Caden is a hypochondriac, we see all of his supposed ailments visualized on-screen. His odyssey through medical hell is actually kind of like that book that Hazel name-drops - Kafka's The Trial. An endless descent without any real answers offered, just more questions, more referrals to more doctors. In the opening scenes we see his hypochondria transmitting itself onto his daughter Olive and to his wife Adele with their "green poop" discussion, and I'd say that's a safe explanation for why Adele takes Olive away and abandons Caden - his influence was a figurative poison that, within the context of the film, became literal.

Another example: Because Caden is a textbook narcissist, he believes that he always has had someone watching him. He's always had an audience. And in Charlie Kaufman's world, this imagined audience actually becomes a character in the film, that being Sammy. Sammy is there watching him poop and watching him have sex - the latter with Caden's child on his lap! I think that moment is there to underline the fact that Caden sees himself as both an exhibitionist and at the same time feels guilty, dirty, and exploitative.

And at the end, Caden ends up where we all end up : in a burnt out city of the dead, no one but a single solitary figure of our imaginations - and one that's so marginally related to us as to be comical; no reunions with lost loves here - to lead us into the great fade-to-white.

The protective bubble that Caden shuts himself off in after his wife leaves him - this giant dome of pretend lives where everyone's an actor in a play Caden is writing and only make sense through the roles he writes for them - only grows smaller and more insular with the years. That war that rages outside and slowly makes it's way through the layers of Caden's defenses is the mounting noise of death coming for him, shutting off everything on its way. 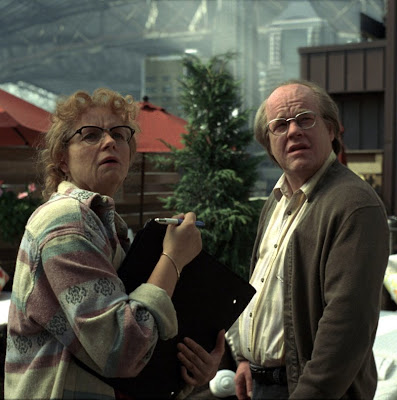 And what to say of his great romance? His great unrealized romance with Hazel, where he writes himself one happy moment at the end before the life she bought (it truly is a home with all the furnishings, including a husband-to-be stocked in the basement and her eventual death seeping from the walls) finally fulfills it's due? There is no one out there today writing better, more emotionally honest love stories than Charlie Kaufman. Like everything is his world, Hazel's life is managed through whatever Caden bothers to take note of (which is why she ages so much more suddenly than he does; Caden simply doesn't notice it until it becomes extreme), and unfortunately Caden is so wrapped up in his own daily dramas and closed off from what is right in front of him that he doesn't even notice her husband has disappeared for who knows how long... he doesn't take note of all he could have had with her until the absolute final moment he can realize such a thing. And so he has his one perfect day, as he calls it, and vows to simply spend the rest of his days reliving it forever.

From there on he turns to stone, as Dianne Wiest says, unable to work anymore, and spends his final days completely shut off from even himself - he actually just takes on the role of a different person altogether. And when his random angel comes for him in the rubble of his former life, he listens to the voices in his head, apologizes, and keeps on writing. Until he isn't anymore.
.
Who? Jason Adams When? 10:04 AM

Just saw it ... and yeah, I might need multiple viewings to make sense of it but it is haunting and provocative nonetheless. Oh Kauffman, you meta-thinker of meta-writing of meta-writers you..

Now that I've had a day to move beyond the sheer despair of it all, I'm appreciating it more. That PSH-Samantha Morton relationship did manage to overcome my initial skepticism to be really affecting. And I maintain that that one moment w/ Emily Watson (you know the one, I don't want to ruin it) is an amazing sight gag.

Very well written post. I just saw the film for the first time -- I left the theater feeling depressed and on the verge of an existential panic attack -- yet that does not seem to be preventing me from eagerly anticipating a second viewing!

Thank you for writing this. I found your insights on the film to be well... quite enlightening. I just saw it (literally, the credits are still probably rolling) but came missed a part of the beginning. Needless to say, I am entirely confused about what happened but can intuit that there is something quite important being said. So I wanted to find what people that are smarter than me are saying about it and yours is by far the best view of it.

I agree with a previous commenter.. this is a haunting film.

Interesting interpretation. Thank you. I'm going to watch it a third time soon.

Interesting interpretation. Thank you. I'm going to watch it a third time soon.

Terrific post. My take on the film (post-third viewing) is very much the same, although I think the film's emphasis on post-modernism and its interaction with identity is the central theme. Everyone has their own story, according to Caden, and simultaneously no one does--Hegelian dialectics in its most convoluted form.

Yesterday I saw this movie and as I was puzzled by the story I looked for information on the net and I found your comment. Having read your interpretation, which I found very interesting and illuminating, I was inspired to write my own interpretation at http://dekantiekeschoolmeester.blogspot.com/.