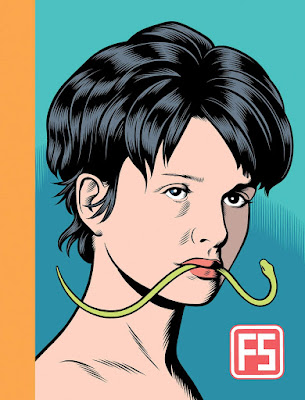 September 24th of this year is looking like a red-letter day for the certain special know-somethings among us -- two new books from two of my favorite modern cartoonists are both hitting that day. First up seen above is the new thingamajig from Charles Burns, the genius behind Black Hole and so forth -- it's called Free S**t and it's actually a collection of sketches he's been doing for years for friends and acquaintances.

"Since 2000, master cartoonist Charles Burns has been self-publishing a secret, handmade sketchbook zine titled Free S**t, exclusively for friends and VIPs. For the first time, Burns has compiled all twenty-five issues into a single pocket-sized volume for all of his fans to enjoy. Featuring finished drawings, rough sketches, process pieces, and more, the book is a revealing behind-the-scenes look at how characters and motifs in acclaimed works like Black Hole and Last Look have evolved. Black & white illustrations."

You can buy that right here. Next up and probably even more exciting because it's actual new piece of fiction and not a collection of randomness (I mean nothing against Charles Burns' Randomness, which puts Everyone Else's Randomness to several leagues of shame) is Rusty Brown, from the also-genius Chris Ware. Here's how that's described:

"Rusty Brown is a fully interactive, full-color articulation of the time-space interrelationships of three complete consciousnesses in the first half of a single midwestern American day and the tiny piece of human grit about which they involuntarily orbit. A sprawling, special snowflake accumulation of the biggest themes and the smallest moments of life, Rusty Brown literately and literally aims at nothing less than the coalescence of one half of all of existence into a single museum-quality picture story, expertly arranged to present the most convincingly ineffable and empathetic illusion of experience for both life-curious readers and traditional fans of standard reality. From childhood to old age, no frozen plotline is left unthawed in the entangled stories of a child who awakens without superpowers, a teen who matures into a paternal despot, a father who stores his emotional regrets on the surface of Mars and a late-middle-aged woman who seeks the love of only one other person on planet Earth."


I still cry every time I flip through Ware's 2003 masterpiece Jimmy Corrigan: The Smartest Kid on Earth and this seems awfully similar to that one, in form anyway -- I'm sure in those compact little pages we can expect a gorgeous pile-up of squares and rectangles that please the eye and the mind whilst shattering the heart. Per usual! Click here to buy your copy of Rusty Brown! Add on Andre Aciman's Call Me By Your Name sequel coming out a month later and this Fall is looking like a prime one for book-lovers named Me. 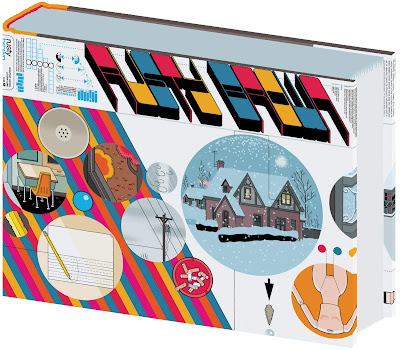 Labels: Call Me By Your Name, Charles Burns