Got to Play Your Harp Until Your Lips Bleed 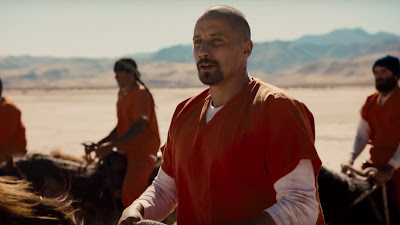 I'm the last person who'd normally quote Bob Dylan lyrics at anybody, but those lines from his 1983 song "Sweetheart Like You" have been stuck in my head as of late -- you know, with the world and all -- and so perhaps they were right there for the picking already, and Laure de Clermont-Tonnerre's new film The Mustang, out in theaters on Friday, didn't wholly earn them itself. Still, they reverberated across the movie all the same, and I don't think it's just me looking at Matthias Schoenaerts in a prison uniform and thinking, "What’s a sweetheart like you doin’ in a dump like this?" 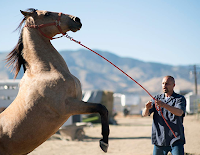 No cowboy, it's surely more than that. Schoenaerts plays Roman Coleman, a name which elicits some laughs from his fellow inmates for its Rural Juror like mushiness, and sets him apart from the start. Not that Roman needs help -- he's a strange one, that Roman Coleman, keeping to himself and occasionally bursting out in fits of rage. He's an awful lot like the wild horse that just got captured and brought to the prison, actually -- at the facility where Roman is housed they allow the prisoners to rehabilitate and train these creatures, dragged off the plains, for a quick turnaround buck, you see, and Roman finds himself drawn to one particularly rough steed...

And alright, you're groaning a little bit by now, right? I too was worried that the film was going to be so blunt with its metaphor it would leave hoof-prints trampled up one side and down the other of my chest cavity. Wild Man Finds Wild Horse And Together They Tame. But it's funny, as The Mustang begins to pile up its dusty bowls of American West Iconography -- dirty boots and tattered flags, Cowboys and Indians -- around this strange trapped man, it actually wanders into unexpected territory. It's more The Misfits and One Flew Over the Cuckoo's Nest, a depressed rumination on a country gone to squalor -- it lives inside a once vast frontier that's found its edges, not so far off after all, boxing itself in. There's chicken wire choking those purple mountains' majesty.

There's a scene around the middle of the film where the prisoners get to take their mustangs for a gallop across the prairies we recognize from old-timey serials onward -- hair wild in the wind, the very picture of Freedom itself. And as the camera pulls back we see everyone surrounded, armed guards on every side. The America of The Mustang is a for-profit-prison stretching in every direction, a Westworld Thunderdome every horizon-long, where we have become the mechanical bulls, bucking like broken robots. Nowhere's as commodified as a strip-mall now, and we're all shoplifters every time we dare to breathe.

i've really should store a cut 'n' paste rave for your reviews but: good grief, you're good at them

But where does it rank on the Schoenaerts sexiness scale?

Wheel -- He looks great obviously, and there's a quick shower scene... but it's kind of funny; nobody is naked, all the prisoners shower in their white boxer shorts. But I thought it was sexy in its own way since the shorts are all see-through with wetness. It's like the prison version of a wet t-shirt contest :)