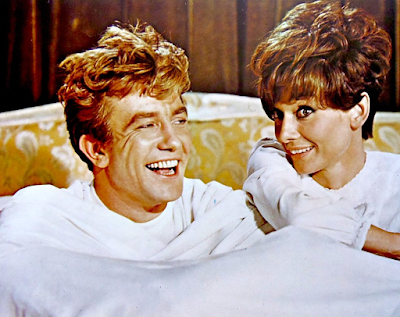 The last thing I saw Albert Finney in was a few months ago when TCM aired 1967's rom-com Two For the Road with him opposite Audrey Hepburn, which was one of the singularly most unpleasant viewing experiences of my life. I found both of their characters cloying and unlikeable, shrill and vapid, deranged really -- they deserved each other, but why I was expected to enjoy the spectacle of their screeching unpleasant love affair I couldn't suss out. 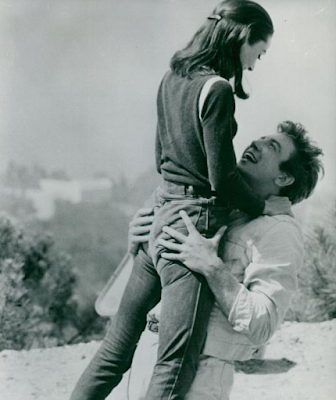 (Finney does spend a lot of time in skimpy swimsuits though, if you're looking for that kind of thing.) Anyway it's a shame that's where my head's at upon hearing that Albert Finney passed away this week at the age of 82 -- I really should go back and watch some of his other older work; I have never seen Tom Jones, if you can believe it! I loved his late-life work with Soderbergh and Julia Roberts in Erin Brockovich of course, and with Tim Burton in Big Fish, and he had a fine small final role in Skyfall a few years ago.

If I was going to pick a favorite Albert Finney movie though (not having seen a lot of the earlier stuff like Tom Jones yet, I mean) I'd probably have to say Michael Crichton's gorgeously ridiculous 1981 plastic surgery psycho-drama Looker, which is just a ball. Finney isn't necessarily "good" in it, but he's there and that's enough. See my previous post on that right here. What's your fave Finney? 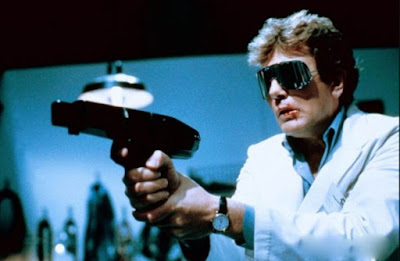 Or his WTF cameo in The Adventures Of Sherlock Holmes’ Smarter Brother.

Hands down Two for the Road and Tom Jones, with honorable mention to Erin Brockovich and Big Fish.

As for "Two For The Road," maybe you had to be there. I think it holds up well.

"Tom Jones" is great. It will want to make you read the book, though.

Tom Jones is a bit lumbering at times but my God Finney is charismatic in it, just so full of joie de vivre. He makes up for any small shortcomings the film might have, overlength being the biggest.

The film of his that I enjoyed the most was Murder on the Orient Express and his delightful take on that fussy Belgian fart Hercule Poirot.

But the films that I think contain his best onscreen work would be:

Saturday Night and Sunday Morning
Shoot the Moon-perhaps his best performance
The Dresser
Under the Volcano-brilliant acting by all but so very, very depressing!!
A Man of No Importance
and the TV movie The Image

Looker is sort of a mess but it's a fun mess.

What a shame he never won a richly deserved Oscar.

I am disappointed that you are so dismissive of Two For The Road.I think you are wrong on that one. I think if you were older ...like an older baby boomer you would treasure Two For The Road. Audrey as always is impossible not to adore and Finney while unlikable is still charismatic. In context we loved the satire of the American couple and to a small town guy like me Audrey and Albert were the epitome of Rich, and Sophisticated . I had never remotely seen anything like Saturday Night and Sunday Morning at the time and didn't know what to make of it, but Finney was incredible. And at the time it opened I saw Tom Jones several times over, the audience always convulsed with laughter. Finally I don't know if Two For The Road is part of his best work, he was always good even in claptrap, but Two For The Road will continue to be one of my favorite Hepburn movies from that era.

One of the greats! I completely disagree with your dismissal of Two for the Road. But for me, his best movie was Shoot the Moon. I first watched it when my parents were divorcing and it was like a sucker-punch to my emotions. All these years later, it still devastates me. Diane Keaton OMG. The scene where Finney tries to give his daughter her present knocks the wind out of me!

I've had a longtime fondness for him in "The Browning Version" (1994), which I'd take any day over Robin Williams in "Dead Poets Society."

Just watched SATURDAY NIGHT AND SUNDAY MORNING on Youtube. Really enjoyed this "kitchen sink drama" from the British new wave. What a breath of fresh air...and Albert is so young and authentic. Rachel Roberts is also so good. Worth watching!!!

As a kid growing up in the 80's with a wild love for horror films, WOLFEN holds a special place in my heart. RIP Mr. Finney.

A few years back, I went on a kick where I watched every Best Picture winner I'd never seen. Tom Jones was the only film I could not find absolutely anywhere. I finally had to order a DVD of it from China. I did not enjoy it.

C'mon Jason! You're entirely too harsh about "Two for the Road.". I thought it was a touching, bittersweet portrayal of the arc of a relationship: pleasure, pain, disappointment, and ultimately enduring love and affection with wonderful performances from two gorgeous stars. What more could you ask? RIP A!bert Finney.