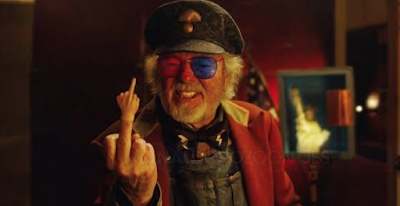 Dr. Jacoby: And the fucks are at it again! Fuck you who betray the people you were elected to help! We're sheep to these monsters, and they don't give a shit! We grow our wool, and just when we're getting warm, they come along with their electric clippers and shear our wool off, and we're just naked, screaming little fucks! No wool for us! Freezing and hungry! In the night. In the dark. And they don't give a shit! Then when we get sick, the pharmaceutical companies make billions! They own the fucking hospitals. Filled to the brim. They own the morgues! They own the embalming fluids! They own the mortuaries, the graveyards! These fucks! Is it the government's business who we marry? What the fuck do we care what the government thinks about who we marry? Are we gonna invite them to the wedding? Fuck no! Oh, they wouldn't come anyway. They're-they're too busy fucking! Fucking us at the grocery store! At the bank! At the gas pump! They're feeding our children chemical shit coated in sugar! Why don't these monsters bite into those tasty treats themselves? 'Cause they'll die in the streets! Just like us! And then they'll bloat like a big red fucking balloon. Stop! Stop distracting yourself with all this diverting bullshit, and pay attention. Save the children! Every parent wants to save their child. Buy yourself a shovel, dig yourself out of the shit, and get educated!

Although the delay on shipping it out is sort of extensive -- they're saying 1-2 months! -- Amazon has got David Lynch's latest masterpiece on blu-ray for the cheapest I've ever seen it, an eensy thirty bucks. That comes out to just 2.9 cents per brilliant minute! Boy howdy is that a deal. Time has been super scarce as of late but re-watching this beauty has been nagging at me on about a weekly basis.  Especially after I saw Kyle Maclachlan in the flesh...

Have any of you revisited it since its first run?
.
Who? Jason Adams When? 2:08 PM

I revisit it quite often, particularly the final scene which I watch once a month. I instagrammed it on the anniversary of its airing.
“What Year Is This?” Amazing!!!!!

After it was over I watched seasons one and two then FIRE WALK WITH ME and by that point the BLU RAY came out and I got it day one and I have now watched that twice. I think hands down that is the greatest television ever. And like Simon said up there - that last episode is a head spinner!