To All the Stars I've Stalked Before

Michael Shannon at a party for WON’T YOU BE MY NEIGHBOR #michaelshannon #wontyoubemyneighbor #mrrogers
A post shared by Jason Adams (@jasonaadams) on Jan 9, 2019 at 5:52pm PST

.
Yours truly went to a "too fancy for my ass" party at Robert DeNiro's Tribeca restaurant last evening for a reception honoring the Mister Rogers' documentary Won't You Be My Neighbor? which was thrown by... Michael Shannon and David Cross, of all people. What a pair! My boyfriend spoke to director Morgan Neville for a bit who relayed - Breaking News!!! - that he does not know what he is doing next.

Anyway you can read my review of that wonderful film right here -- it also just won "Doc of the Year" from my critics group this week and I honestly wouldn't be surprised to see it snatch the Oscar; it's a true crowd-pleaser with the perfect anti-Trumpian message of decency and kindness. It's not my favorite doc of the year (more on that when I get around to listing my favorite things of the year... whenever I get around to that) but I think it's a well-made and moving piece of film and perfectly worthy of praise. And speaking of "things that just won awards from my critic's group"... 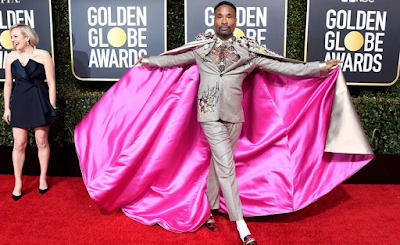 ... my apologies to Pose and American Horror Story star Billy Porter, whose work for the former just personally won him "Best TV Actor" and "Best Musical performance" from us folks at GALECA this week -- apologies to him for having to deal with sickly, unawake, subway-riding me for a bit this morning...
.

Just realized the guy in the short fur jacket sitting half on me in the subway middle seat as I sniffled my nose loudly was BILLY PORTER (!!!) - what a comedown for him after taking the Golden freaking Globes over with a glorious cape, man (he looked great though)
— Jason Adams (@JAMNPP) January 10, 2019

Thank you for including the link to your review of "Won't You Be My Neighbor?", which I missed - your incredibly personal essays on these films are so beautiful, and this is right alongside your writing on "Call Me By Your Name" and "The Florida Project" in terms of hitting on something deep and true.