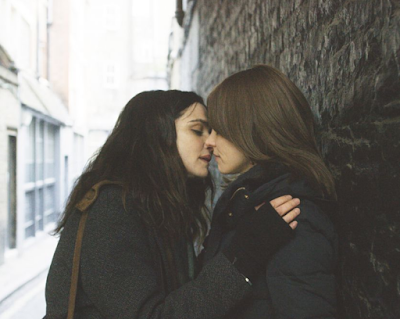 Last year was my first year as a proud member of GALECA: The Society of LGBTQ Entertainment Critics, and when everything turned up Call Me By Your Name in their year end awards the Dorians (see our post on 2017's winners right here) I felt pretty good about all that... unsurprisingly given our predilections. Well today the 2018 Dorian nominations have been announced and as is fitting for a year sans a consensus pick like CMBYN my feelings this year as I scan through our choices are more complicated.

I mean I suppose I should've prepared myself for the Star is Born love (siiigh) and for the Rami Malek nomination (triple siiiigh) but the placement of The Favourite's leading ladies (Emma Stone and Rachel Weisz) in the Supporting categories is frustrating - I really hoped we'd do better than the other groups on that matter. Category Fraud must end! Just know that I personally voted for Olivia Colman in Supporting, where she belongs.

There is a lot to love in the nominations for sure - Ben Whishaw and Toni Collette and ROMA, oh my! It's just that I actually see very few of my weird little babies accounted for this year in the final tally, but then I suppose that's a typical side effect when you average out hundreds of voices - the quirks get sanded down and a consensus forms, no matter how free the year's felt from one. Point being I'll get to work a little harder on our Golden Trousers Awards (aka The Pantys) - which believe it or not after several years of laziness on my part are actually in the works right now - so you'll know who I personally fought for the hardest. And you can hit the jump for the Dorian Award nominations (the winners are awarded on January 12th) and official announcement... 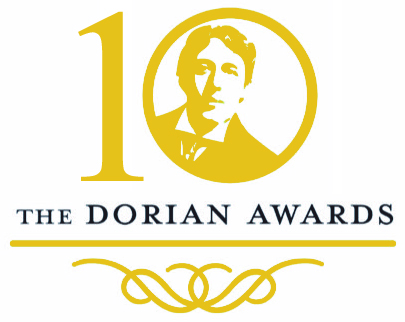 Thursday, Jan. 3, 2019 - Hollywood, CA - GALECA: The Society of LGBTQ Entertainment Critics has named its nominees for its milestone 10th Dorian Awards for the best in film and television of 2018. Leading in the movie categories with eight nominations is “The Favourite,” followed by “If Beale Street Could Talk,” “Can You Ever Forgive Me” and “Roma” with six nods each, and “A Star is Born” with four. The stars of the latest “Born” remake—Bradley Cooper and Lady Gaga—are both up for Film Performance honors as well as the group’s Wilde Artist of the Year award.

The spectacular, practically candy-coated Marvel adventure “Panther” is one of the titles up for Visually Striking Film of the Year, while the Diane Keaton comedy “Book Club” and “Aquaman” are in the running for (or from?) the Campy Flick honor.

In TV categories, FX’s transgender-empowering drama “Pose” and BBC America’s biting cat-and-mouse thriller “Killing Eve” lead among drama series. “Eve” headliners Sandra Oh and Jodie Comer, true to their hit’s storyline, vie against each other for TV Performance—Actress, while Hugh Grant and his “A Very English Scandal” paramour Ben Whishaw face each other on the gentlemen’s side. Also making a fresh impression with GALECA, comprised of over 200 members in the U.S., Canada, Australia and the U.K.: HBO’s hitman comedy “Barry,” Pop network’s rich-family satire “Schitt’s Creek,” and Julia Roberts and her cryptic new Amazon conspiracy tale “Homecoming.”

“We’re thrilled by the strong variety of films and TV performances our diverse group of members has chosen to praise,” said GALECA President Diane Anderson-Minshall, Editorial Director of The Advocate. "In a lovely compliment to the Time’s Up movement, several categories, including Wilde Artist of the Year, Wilde Wit of the Year and Rising Star, are dominated by women this year. And it’s inspiring that the majority of our Director of the Year nominees are people of color, including Spike Lee, Barry Jenkins, and Alfonso Cuarón.”

“It’s hard to believe this is our 10th go-around of giving out our Dorian Awards,” added GALECA’s Executive Director John Griffiths. “In such oddly combative times, that’s really something to covfefe.”

Speaking of cheeky, along with its latest nominations, GALECA has announced that comedian and radio personality Frank DeCaro (“The Daily Show”, Sirius XM’s “The Frank DeCaro Show”) will preside as Master of Ceremonies at its invitation-only 10th Dorian Awards Winners Toast. The event will be held Saturday, January 12, noon to 2:30 at Paley restaurant in Hollywood’s historic Columbia Square.

De Caro, fondly remembered for his turn as the campy movie critic on “The Daily Show with Jon Stewart,” embodies “the perfect mix of wit and sincerity that suits our freewheeling Toast format,” said Griffiths. “He’s not only charming and funny, he has a deep respect for what it takes to make quality entertainment, remains sweetly starstruck even in these jaded times, and keeps his eye and heart on the big picture too.” DeCaro’s latest book, “Drag: Combing Through the Big Wigs of Show Business,” comes out from Rizzoli this spring.

Since GALECA’s first film and TV favorites were named in 2010, over 200 artists and productions have received a Dorian Award, while over 1000 have received nominations. Among its Film of the Year winners are “Argo” and “12 Years a Slave,” as well as two movies directed by Luca Guadagnino, “I Am Love” and “Call Me By Your Name.” With five Dorians each across various categories, “Moonlight” and “Carol” stand as the most awarded films in GALECA history, while “Transparent,” with six wins in best-series categories alone, reigns as the most honored TV title.

Performers? Jessica Lange, Cate Blanchett and Jeffrey Tambor rank as GALECA’s most honored so far, while MSNBC news personality Rachel Maddow and filmmaker Jordan Peele have each been recognized with three Dorian wins in non-performance categories.

LGBTQ Documentary of the Year
THE GOSPEL ACCORDING TO ANDRE
MCQUEEN
SCOTTY AND THE SECRET HISTORY OF HOLLYWOOD
STUDIO 54
WHITNEY
Visually Striking Film of the Year
ANNIHILATION
BLACK PANTHER
THE FAVOURITE
IF BEALE STREET COULD TALK
ROMA
Unsung Film of the Year
COLETTE
DISOBEDIENCE
THE HAPPY PRINCE
TULLY
WE THE ANIMALS
WIDOWS
Campy Flick of the Year
AQUAMAN
BOOK CLUB
MAMMA MIA! HERE WE GO AGAIN
A SIMPLE FAVOR
SUSPIRIA
TV Drama of the Year
AMERICAN CRIME STORY: THE ASSASSINATION OF GIANNI VERSACE
THE HANDMAID'S TALE
HOMECOMING
KILLING EVE
POSE

TV Current Affairs Show of the Year
THE DAILY SHOW WITH TREVOR NOAH
FULL FRONTAL WITH SAMANTHA BEE
LAST WEEK TONIGHT WITH JOHN OLIVER
THE LATE SHOW WITH STEPHEN COLBERT
THE RACHEL MADDOW SHOW
TV Musical Performance of the Year
ADAM LAMBERT, “BELIEVE”, 41ST KENNEDY CENTER HONORS
BILLY PORTER, MJ RODRIGUEZ AND OUR LADY J, “HOME”, POSE
NOAH REID, “SIMPLY THE BEST”, SCHITT’S CREEK
KEALA SETTLE, “THIS IS ME”, 90TH ACADEMY AWARDS
SUFJAN STEVENS, “MYSTERY OF LOVE”, 90TH ACADEMY AWARDS
Campy TV Show of the Year
AMERICAN HORROR STORY: APOCALYPSE
CHILLING ADVENTURES OF SABRINA
QUEER EYE
RIVERDALE
RUPAUL'S DRAG RACE
The "We’re Wilde About You!" Rising Star Award
AWKWAFINA
ELSIE FISHER
HENRY GOLDING
INDYA MOORE
MJ RODRIGUEZ
Wilde Wit of the Year
(Honoring a performer, writer or commentator whose observations both challenge and amuse)
SAMANTHA BEE
HANNAH GADSBY
KATE MCKINNON
JOHN OLIVER
MICHELLE WOLF
Wilde Artist of the Year
(Honoring a truly groundbreaking force in film, stage and/or television)
BRADLEY COOPER
HANNAH GADSBY
LADY GAGA
NICOLE KIDMAN
RYAN MURPHY
ABOUT FRANK DECARO
Comedian, pop culture pundit and radio/TV personality Frank DeCaro has spent the last three years touring North America as the opening act for Lisa Lampanelli. He is best known for his 12 years as the host of the daily national radio program The Frank DeCaro Show on Sirius XM, and his lauded, six-year stint as the movie critic on The Daily Show with Jon Stewart on Comedy Central. He is the author of five books including The Dead Celebrity Cookbook, Unmistakably Mackie: The Fashion and Fantasy of Bob Mackie, A Boy Named Phyllis: A Suburban Memoir, and Drag: Combing Through the Big Wigs of Show Business, due from Rizzoli in spring 2019. Follow DeCaro @frankdecaroshow and visit his website, www.frankdecaro.com.
ABOUT GALECA
GALECA: The Society of LGBTQ Entertainment Critics sponsors the Dorian Awards, honoring the best in film and television. The nonprofit group counts over 200 active critics and journalists writing for legitimate media outlets in the United States, Canada, Australia and the U.K. GALECA aims to generate camaraderie and solidarity in an unsettling media environment, champion constructive criticism and elevate the craft of entertainment journalism. Via panels, screenings and the annual Dorian Awards Winners Toast, GALECA also strives to remind at-risk youth, bullies and bigots that our Q-munity has a rich history of putting great and unique entertainment on everyone’s radar. After all, how would the world fare without knowing what's campy? Keep in touch via GALECA.org, Facebook, Twitter and Instagram.

Suspiria ending up in Campy Film of the Year with Mamma Mia feels like an insult and misunderstanding of the film.

Oh I am not happy about that either, Ax

Good to see some very fine things on this list that haven't received much praise elsewhere. I'm especially thinking of Jodie Comer and Schitt's Creek re: TV, and Melissa McCarthy and We the Animals re: film.

Scott - yes, all great noms, those

The film nominations are fairly in line with other critics - though more favorable to 'Beale Street', plus Elizabeth Debicki love - but I love the fact that 'Annihilation' is in there for the amorphous category of 'Visually Striking Film'. Even if you HATED that movie, you can't deny it's visually striking.

Also, the TV side only has 10 nomination spots, which means only 1 is from comedy :( Although I appreciate Jodie Comer making it in alongside Sandra Oh.

Big-time sigh over the Rami nomination here too. Rest assured, I didn't cast my vote that way. And I do wish that our nomination slate looked different than most of the other slates.