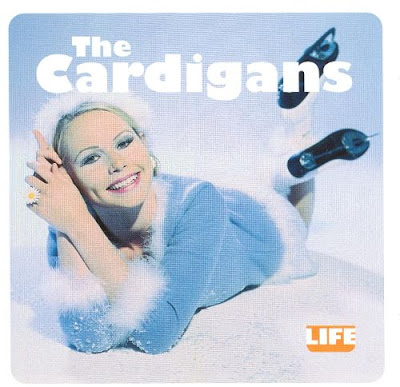 It is a glorious and blessed day! And not just because the Democrats took over the House, although that's sure a plus. No today is the day that they finally, after literal years of googling on my part, gave us a release date for all of the Cardigans six glorious and most perfect albums being reissued onto vinyl, huzzah! I don't get to post about my second favorite band very much because they haven't put out a new album in thirteen (goddamn) years - they have been doing some shows in Europe and the UK as of late, but I ignore that news because I can't go and it makes me sad. But there've been whispers (via the band's Facebook group mostly) that their albums, which've been out of print on vinyl and way expensive, would be reissued soon, and today I stumbled upon the truth of it...

It's happening on February 1st!!! For some reason the only one on Amazon US as of right now is the band's third album 1996's First Band on the Moon... okay that's the record with their biggest US hit "Lovefool" so I suppose I understand why that's more of a priority Stateside. But all six of their records, from Emmerdale in 1994 through Long Gone Before Daylight and Super Extra Gravity in the Aughts, are perfection, utter perfection, so Amazon US needs to get on it. ETA Okay they got on it -- all of the albums are out on February 8th -- click here to order! Now let's feel fuzzy inside with some "Lovefool"...
.
Who? Jason Adams When? 5:15 PM

Which is your favourite band? The Cardigans is my second too! Love them since... the beginning.

"Long Gone Before Daylight" is their masterpiece. Fantastic band.

Anon - my favorite band has been Radiohead since the first time I heard "Creep" on the radio in the early 90s.

I didn't become a fan of the Cardigans until after "Lovefool" was a hit, First Band on the Moon was my first record of theirs, but I immediately went back and fell for Emmerdale and Life and then of course Grand Turismo was just the greatest. I agree with Anon #2 that LGBD is their masterpiece though.

What is your phono setup like? I got into vinyl a few years ago and am always interested in what people choose to play their vinyl on. I was excited that Enigma had all their records released last year - I had to scoop them all up.