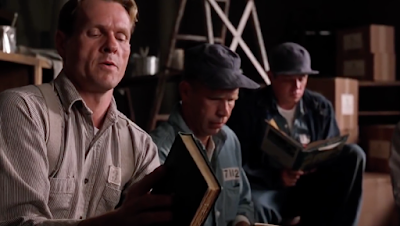 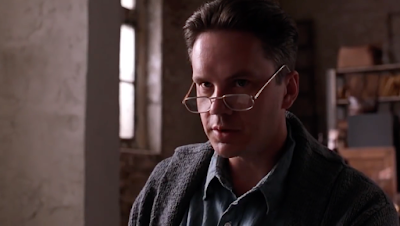 Andy: Dumb-ass? "Dumas".
You know what it's about? You'll like it,
it's about a prison break.
Red: We oughta file that under
"Educational" too, oughten we?

Here on Frank Darabont's 70th birthday (Happy birthday, Frank!) it seems a fine time to give a little love to all of the Prison Library scenes in his 1994 classic The Shawshank Redemption -- the "Brooks Hatlen Memorial Library" is of course named after the former librarian and Very Sad Story whose tragedy, of being imprisoned for so long that he can't adapt to the outside world, frames everyone's struggles inside of Shawshank.

The relationship between Brooks and Heywood (who's the butt of the "Alexandree Dumb-ass" scene is one of the million little relationships that Darabont weaves through the film, enriching its captive world - it's only appropriate that heywood get the most out of the space, since Brooks almost murdered him inside of the old one.

Of course that's just one of the strands of the film, and King's story, that's about the magic of books and book learning -- I don't know if you've heard but noted author Stephen King likes books, and tends to romanticize them. It's one of his keenest features. Here's another scene in the film that's about twisting one's education to one's benefit, no matter the benefit:
.
Who? Jason Adams When? 3:03 PM