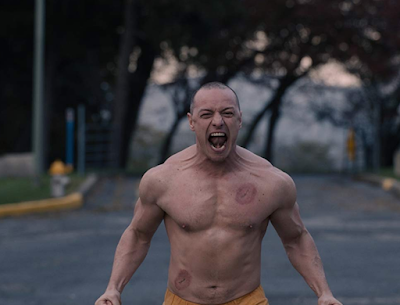 Glass ultimately feels more like an under-pencilled sketch than a finalized film, a real shame given the 19 years between this and Unbreakable, and when Shyamalan does pull together all of his threads with one of his typical third-act reveals, well, it's telling that I use the word "reveal" instead of the usual "twist"since I never felt twisted; it all comes up wanting. Bruce Willis and Sam Jackson never convince us they even want to be here - they both seem drugged even when their characters aren't supposed to be drugged. At least James McAvoy is having fun and giving it his all, and when he's twisting (ahh there's the word) through all his character's alters the movie is having fun too. Still, that's not a movie, that's an acting reel. Here's hoping James uses it to get some future roles worthy.
.
Who? Jason Adams When? 5:25 PM

I thought Jackson did some decent work, but in general wasn't given much TO do. Agreed that the movie just wasn't very good. Disappointing... I really liked Split, and I re-watched Unbreakable to prep for the new film, and came to a new appreciation for that one as well. But Glass under-delivers on the promise of both.

Still as comic book movies go, I appreciated it for it's low budgeted finale : no cities were destroyed in a battle that goes on for hours on end, and how it kind of up-ended typical super hero shenanigans, I think the 3 films add up to a decent trilogy. Not sure I'd follow it into another extension though.

The selling point for me was McAvoy and he did not disappoint.

It all seemed like such a waste; as if folks were being lazy. I mean, I am sure Shyamalan was given a decent budget and yet the whole thing is shot on one or two sets inside the hospital. Also, he should have assumed we all saw the first two, since the majority of the film is us having to go through the WHOLE story one more time (even down to being reintroduced to all of MacAvoy's alter-egos). Robin Wright must have read the script in advance and was wise to turn a part down.

Actually, he wasn't given a decent budget. He financed the movie himself for $20 million. The movie was doomed from the start.