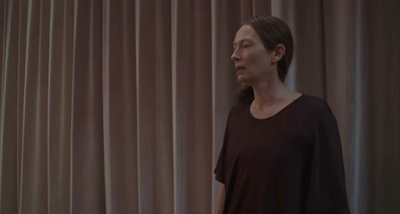 Madame Blanc: Movement is never mute. It is a language.
It's a series of energetic shapes written in the air like words
forming sentences. Like poems. Like prayers.

Luca Guadagnino's Suspiria hits blu-ray today! Click on over and buy your copy if you haven't already, and then buy one for every person you know. Send a couple to me while you're at it! Make Suspirias rain, yo. The film's been streaming for a couple weeks now but the blu-ray has a trio of featurettes worth checking out about the making of the film, with a focus on the dance sequences and its astonishing make-up. And in related news...

... it is the 42nd anniversary of Dario Argento's classic original film this Friday! In Italy at least, where the movie was released on February 1st, 1977 -- it didn't hit the US until August that year. I guess we'll all just have to watch both movies back to back to back to back this weekend, then!
.
Who? Jason Adams When? 1:09 PM

If I haven't seen either version (I know! It doesn't make sense! Don't kill me!), which one should I start with?

I'd watch the Argento one first, since the Guadagnino one, as different as it is, does get some of its heft from deconstructing our expectations from knowing the first one. But then that's my take? Maybe it'd be interesting to go the other way? They are VERY different, it might not matter.